Stefano De Luigi was a discreet presence on the sets of many hardcore videos – from Tokyo to Los Angeles, from Budapest to Berlin – and collected his work in Pornoland, published by Contrasto in 2004 with a suggestive central text by Martin Amis.

In the book, the photographer moves along the edge of cinematographic representation, revealing the complicated reality of the staging and dwelling on the unusual personal aspects of the protagonists. Behind-the-scenes images alternate with preparations and pauses; the action scenes – expanded and declared – lose the voyeuristic sacredness of the taboo to manifest themselves in the prosaic nature of reality.

Other times the gaze searches for humanity in the pile up of fake love: a couple of actors who hug each other tenderly at the end of the professional intercourse, a conversation, casually carried out in the nude, on the side of the set, an actress breastfeeding during a break from filming.

The peak of De Luigi’s mastery is expressed in the images depicting sex scenes, where the photographer uses amusing artifices to make the unpresentable presentable, even poetic: providential objects in the foreground become wings for the most controversial areas of the intertwined bodies, shapes of feet that draw allusive silhouettes against the blue of the sky, faces caught in the mimicry of pleasure that coyly look out from the edge of the frame, suggesting what is best left unsaid.

De Luigi uses colour with unusual shrewdness and talent: a skilled surfer of the dominant colors, the photographer is not afraid of the green of neon or the blue of LEDs. He seeks out and intensifies backgrounds of full colours – appropriately reprised in the satisfying graphics of the book – which act as a kitsch background for coarse scripts with an obvious outcome.

Finally, the blur, powerful evocator of the whirlwind of embraces and a skilful camouflage expedient, allows the photographer a realism and a proximity that would otherwise be impossible without risking falling under the scrutiny of censorship.

In his work, De Luigi develops a broad and amused account of an important phenomenon of contemporary costume. He de-sacralizes the pornographic, reveals it in its normal fragility, curbing the ancestral fascination towards the forbidden.

Pornoland tells of people behind the clichés, returning kings and queens naked from the script of the nude. 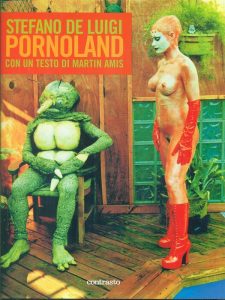