In how many ways can we observe the world? Is it only the eyes that reveal its mysteries and wonders? No, not even photography dares to be so categorical. The lens captures what our mind and senses perceive, as does our body. The journey reveals what is around us and art knows it well. Human beings, driven by desire or necessity, have always traveled, pushed themselves over the edges of their own known world, feeling the urge to narrate their own experience, consigning their steps, their point of view to future collective memory. The seventh issue of the Photolux Magazine addresses the theme of travel through photography and, in the concept of moving into emotional and physical space, I chose to rely on the lesson of Natalino Russo, photographer for magazines such as National Geographic, Dove, Meridiani, The Sciences, but also speleologist, Touring Club author, member of exploration teams around the world, writer, but above all, walker.

“Walking is writing” he states in his book L’Italia è un sentiero (Italy is a path), published by Laterza, for months at the top of the online and onlife industry charts, which portrays our country in a unique way, through mountain paths, of transhumance and ancient pilgrimages, where the act of walking has been transformed into vision and writing, by allegorical translation from the realm of ideas into the actual world. But how do you write a travel book? L’Italia è un sentiero it is not a tourist guide, it recalls the cahiers de voyage noted at the time of the Grand Tour, the notes of Hesse, Goethe or Giustino Fortunato for their lyrical approach and infinite Panic vision of nature

As you can imagine, this book is accompanied by photographs by Natalino Russo, but differently from what the reader would expect. In fact, in the volume there is no image other than the cover one, the work of another photographer, Maurizio Rellini; and then only words, maps drawn with letters, commas, points.

“Step by step, time is transformed into space and by measuring it with our body we experience it directly. We are immersed in the history that unfolds under our feet: the past is behind our back; the future is ahead and we explore it with our pace.” Russo writes, operating a sort of three-dimensional concretization of our role in the real scene and in this way, scrolling through the chapters, thematically divided by type of path – history, nature, faith, war memories, new millennium – the readers can trace their own geographical map, of what they already know and of what the author reveals for the first time, walking his steps again.

Natalino Russo, however, is a photographer and, therefore, his path is made up of many languages, many traces and feelings. In his book he quotes Alex Webb and the volume On street photography and poetic image, published in Italy by Postcart, where looking and walking reveal themselves as elements of an exercise in knowledge for the confident search for the unexpected, the unknown and the secret. Similarly, Natalino Russo asserts that “the only way to photograph, and in general, to observe the world, is to walk. There is a profound relationship between these two actions. Steps, like photography, are a simple tool, useful for including and excluding, for approaching and moving away with ease, giving the eyes time to adapt, to assimilate the mutations of the context.”

When I chose to write about L’Italia è un sentiero for the knowledgeable readers of Photolux Magazine, I proposed one thing to Natalino Russo: to show the photos – many of which unpublished – that marked his travel when creating the book. After all, the writing of a photographer without images but with plenty of imagination can be told through the camera even after some time. And so it is that, while my fingers touch the pages again, recalling one of the book presentations made with the author, in 2019, I return to my notes, to my reflections of the time and today I find something more: in scattered order, like poetic memories, the shots now substantiate the story, the pace of Russo’s steps and words.

From Veneto to Apulia or Campania, from Tyrol to Rome, with eyes and lens intent to watch the dirt roads of history or to fall in love with the sea, the shots that Natalino Russo has collected narrate the cosmogonic translation of truth, the veracity of the sensations, the wonder of everything and that tension towards a kind of beauty that man can only capture for a few moments, caressing it, observing it and filling his soul with it. Paths and hikers can be found in Russo’s book and so, looking at the photos that “do not” accompany the volume, here and now, we feel closer to those who have walked those paths, almost to the point of taking empathic, and maybe inexplicable, steps.

Every detail, which seems to come on the pages from the dawn of time, appears as a tiny piece of a story immensely bigger than us, of which, however, a unique memory must be preserved or a journey that Natalino Russo, with his legendary irony, calls a “treadmill of desires”.

This happens at the same time as artificial intelligence created by mankind arrived on Mars, just a few days ago, and we, on the other hand, continue to obey the restrictions of the pandemic; thus, the reflection according to which “walking, after all, is like breathing” almost at the end of  L’Italia è un sentiero, accompanies some precious advice that Natalino Russo gives to the reader, to the future hiker, to the accustomed traveler or to who, simply, now as never before, wishes to set out on unknown, unusual or unexpected paths in the wake of what I often call “nostalgia for the future”.

The folds of the pages of the book, every word, every passage, become elements of cartography forever in progress, which from the story of Natalino Russo unravels into a new mapping, acquiring character through the mediation of the reader. If the author, however, has chosen not to accompany his steps with images, now that moment seems to have come, through the mediation of a reader like me, not only for the need to create a dialogue of words and photos – although this will happen for those who have already read the book and for those who have yet to do so – but perhaps for that unconscious fear of not being able to see anymore.

L’Italia è un sentiero is the story of what it meant to travel through our peninsula up to two years ago. It seems like yesterday, yet it is not. Today we rest, in a sense, we just don’t know when we will be able to get back on the road. We take small steps and we know that all that exists between us and what will come is freedom of uncertain and uneven shapes, such as the mountains, the plains and the steep coasts told by Natalino Russo. Now, however, we need to imagine that freedom as Russo has already seen and explored it.

This article, in addition to being a piece of advice for an excellent read and a surprising photographic discovery, intends to reveal an auspicious tension: that this gaze towards infinity and beyond, of spaces, times and bodies, may soon continue in your lives and seal the creation of a new, intense, collective atlas, because, as the last shot chosen by Natalino Russo suggests, if Man is an island, even after the most violent storm he will be able to re-emerge in all his strength. 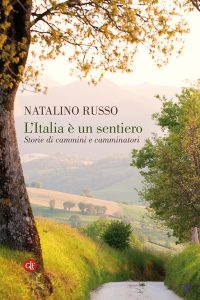