For me, photographing was like putting next to the tracks of reality, of all the ongoing accidents, another one, parallel to it on which my thoughts and my sensations ran consequently; as they reacted to the accidents of life, they took their photographic form. Relying on images is an action that continues to purge my mind.  [Per me fotografare è stato come affiancare alla rotaia della realtà, degli accidenti in corso, quell’altra rotaia, a essa parallela su cui correvano di riflesso alla prima i miei pensieri e le mie sensazioni mano a mano che reagendo agli accidenti della vita, prendevano una loro forma fotografica. Affidarmi alle immagini è un agire che continua a spurgarmi la mente.]
Roberto Salbitani

Moved by a continuous search for freedom, outside the box of single thought but also of the cultural establishment, Roberto Salbitani embodies the indomitable spirit of the traveler. And not only for Viaggio, a wonderful project created going back and forth on trains, in the 1970s and ‘80s, but above all, in my opinion, for the constant tension of his photographic wandering that uses photography as an existential interrogation tool. Salbitani is undoubtedly a heretic, a photographer and intellectual who had the strength to choose, to feed dissent and the antibodies, already in his DNA, against a certain type of management of photographic culture and art market.

I have known him for many years, since 1986 when I was a guest in his house on Giudecca, then a secluded Venetian island where he had happily settled ten years earlier, possibly looking for a break, to cleanse himself – as he always emphasizes – of modernity, after years of “cultural wandering” in Europe and the United States. Years in which he has started fruitful collaborations and friendly relationships with the greatest names of photographic culture. Since then, friendship and mutual esteem have grown over time, naturally and constantly. I was able to appreciate his extraordinary qualities as a darkroom teacher in the advanced black and white printing courses, his profound knowledge of history and photography, which was strengthened over the years as part of the editorial staff of “Progresso Fotografico”, a historic Milanese magazine founded in 1894 by Gian Rodolfo Namias, and I also managed, at last, to internalize his approach to photography as a device of the unconscious, strongly connected to the individual conscience. 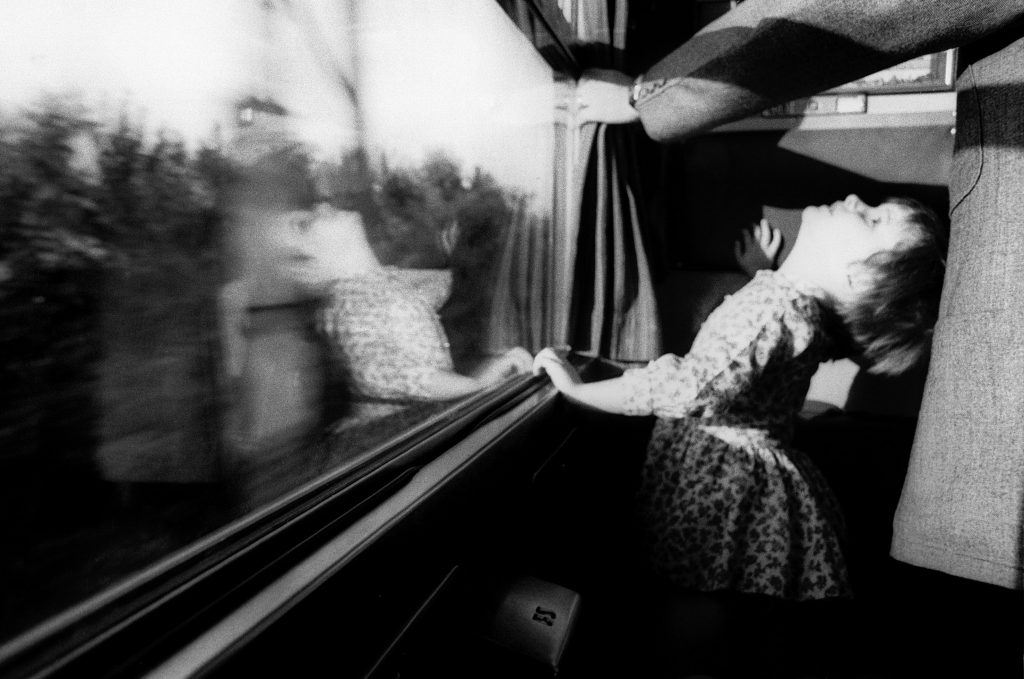 In the Nineties, anyone who, like me, attended his Scuola di Fotografia nella Natura [School of Photography in Nature] in Mogginano, near Arezzo, remembers the long, passionate discussions around the fireplace or at the dinner table, always informal and never professorial, in which Roberto urged those who entrusted themselves to his teaching method to question the profound reasons behind an expressive choice.

An approach that, while providing a wide range of the most refined printing techniques (from ancient ones to fine art printing) tended to overshadow photography as a technological apparatus to enhance it as a tool for investigation and knowledge.

The restless and open spirit of the traveler, of the one who seeks, who listens, who has no preconceptions runs through the entire work and life of Roberto Salbitani whose ultimate goal has certainly never been success, but rather, with his receptive gaze, cultured but not cerebral, the result of an inner push, of a desire, of memory, of a suggestion. In the name of photography intended perhaps as a “mending” of a wound. 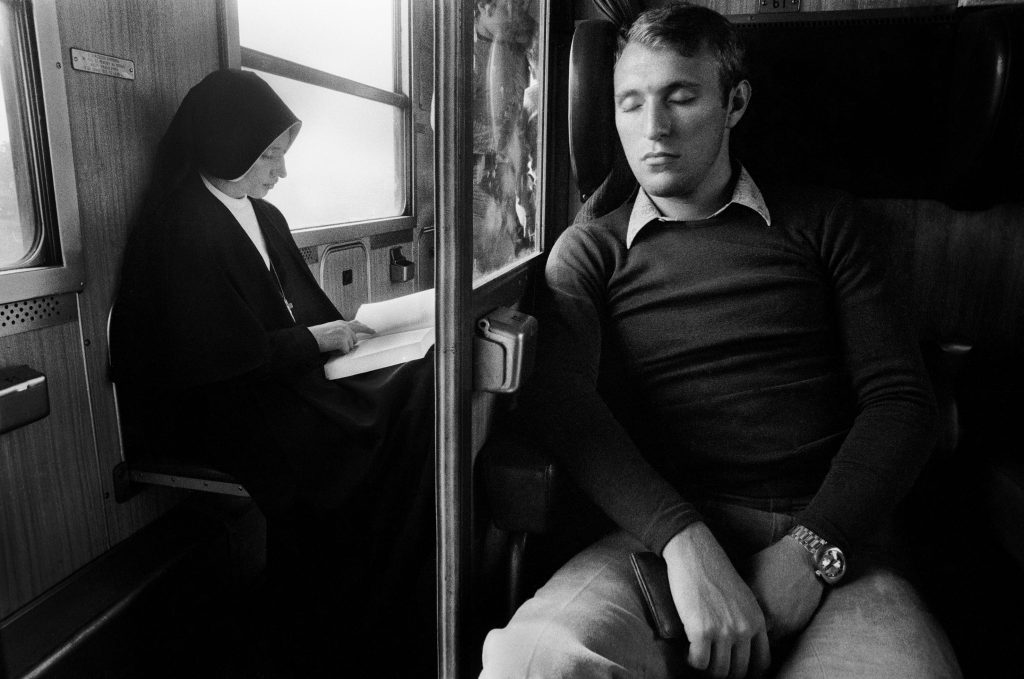 Viaggio [Travel] is undoubtedly one of the projects that most reflects this existential condition, made of precariousness and suspension. Completed between 1974 and 1982, the photographic series was presented at the Galleria Documenta in Turin and at the Studio Fossati in Alessandria in 1977, at Fotomania in Barcelona in 1978, at the Rondanini gallery in Rome in 1980, at the Figura gallery in Biella and at the Town Hall of Reggio Emilia in 1981. Published as a portfolio in the magazine “Creative Camera” in January 1980, it was then printed extensively in the book Viaggio. Fotografie 1971-1994, published in 1994 by the CRAF of Spilimbergo.

But it is only in 2019 that the photographic project was finally published in full by Contrasto editions with the title Il viaggiatore parallelo. Fotografie e scritti in diretta dal treno [The parallel traveler. Photographs and writings live from the train]. It collects images and words by Salbitani himself, collected over many years of travelling by train, far and wide across the Italian peninsula. The volume is enriched by a contribution of Roberta Valtorta, one of the most important figures in the photography field at an international level. 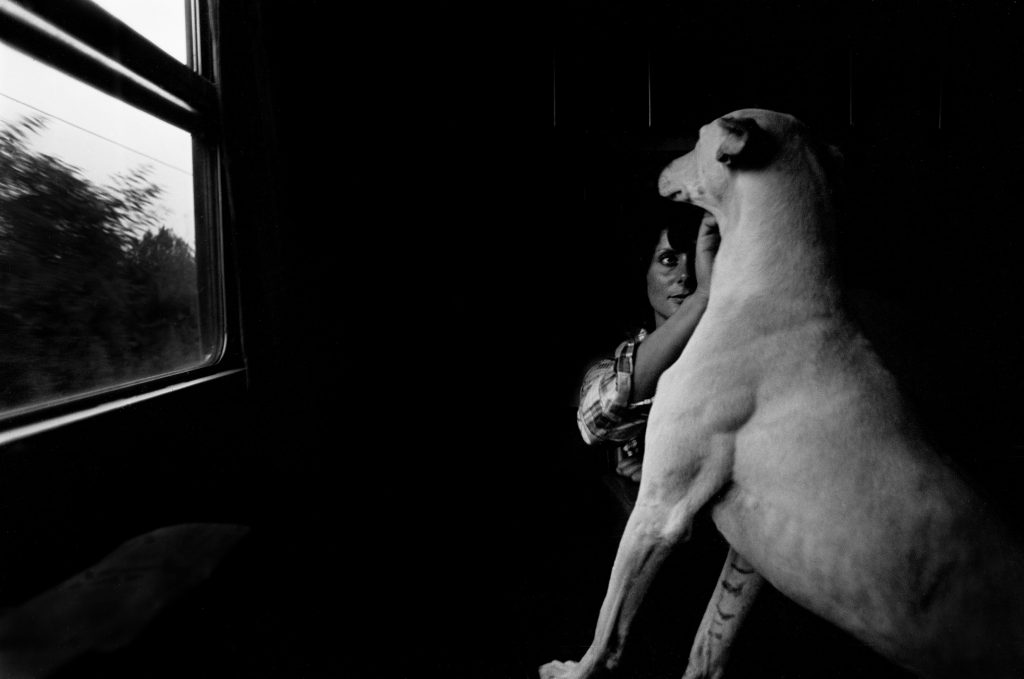 Salbitani, who as a young man attended the Faculty of Foreign Languages ​​and Literature at the Ca’ Foscari University, albeit irregularly, loves writing. And he knows how to do it very well by entrusting his observations, his longings, his doubts to a cultured, emotional, fluid writing. The reflections accompanying the images bear witness to this; with considerable autonomy and a strong literary value, they appear almost as a sort of parallel path.

In this regard, he writes: A moment, a single glance, but enough to tune the time of the train to my inner time. But already the landscape starts running backwards, the view becomes entangled in the enigmas of distorted perspectives, things blur into each other when it is not the blur of the trees in the foreground that blindfolds my eyes. The train and the world resume their march in parallel but also in opposition to each other: the first, undeterred, pointing his nose forward like a charging rhino, the other running backwards like the companion who from outside greets the traveler at the window. But twinned for life.

Over the years, Roberto Salbitani has wondered for a long time on the extraordinary coincidence of lives and destinies represented by the train journeys that marked his entire existence. I am fond of trains – he writes in the introduction to the volume – despite their constant pulling at me, making me parallel to everything, always horizontal and never being able to see where their head is leading me. […] The train makes me touch the bodies and gestures of people that I could basically ignore because nothing binds me to them except that casual point in space, a fraction of time among infinite ones. This coincidence of lives, destinies and directions, which is no longer the same one carriage down, which is swept away by the next train, pushes me to cling on to something […] People and views, different spaces and times that connect and are reflected in each other. […] Who actually were those people, I wonder, what real places flowed out of the frames of those windows before I assigned them a seat on my train, on my journey? Looking at it today, I may have dreamt of this trip. 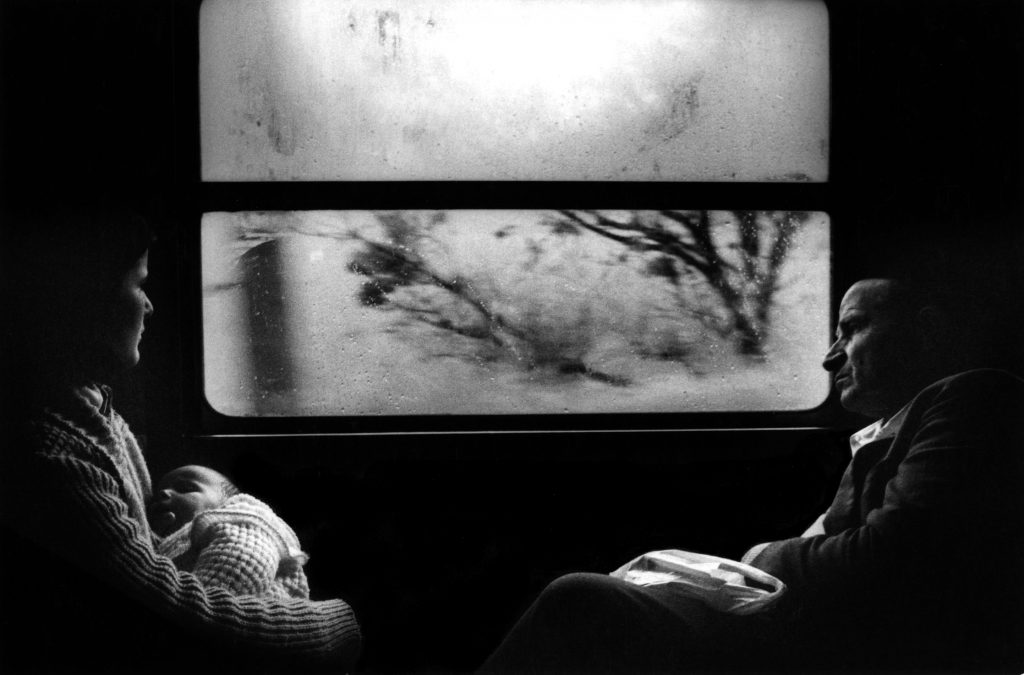 The photographer’s universe, his thoughts, his melancholy and above all his visionary begin to emerge strongly as we enter the fifty-three images through which the visual story unfolds. A story that does not have the characteristics of a reportage since the documentary intent is totally absent, also thanks to a vigorous photographic black and white from which the people portrayed emerge as apparitions, frozen, suspended, waiting. Salbitani delivers the materialization of his encounters and his thoughts to dense and tarry prints. He suggests more than explaining, appealing to our senses, our perceptions. After all, it is in the realm of darkness, of the repressed, of the precarious, of the shadow, that the dream, the vision, takes shape.

The proximity to the work of his beloved Eugene Smith is strong, both for the tonal qualities of the photographic print capable of enhancing the world of the undefined and for the ability of both authors to push photography to a narrative that is nothing less than cinema, another important point of reference for his poetics.

In addition to the darkroom, Roberto Salbitani loves to entrust the strength of his visual thought to the narrative sequence, to the layout of the images, to the visual combinations. But this urgency of his to create meaning, connections between images is not resolved didactically in a formal, geometric juxtaposition. What Salbitani pursues with his sequences is something more archaic and profound, something visceral and sensual; especially in this work, where he gives us a deep and parallel feeling of the journey, in which the inside and outside coexist or dialogue through the layout. 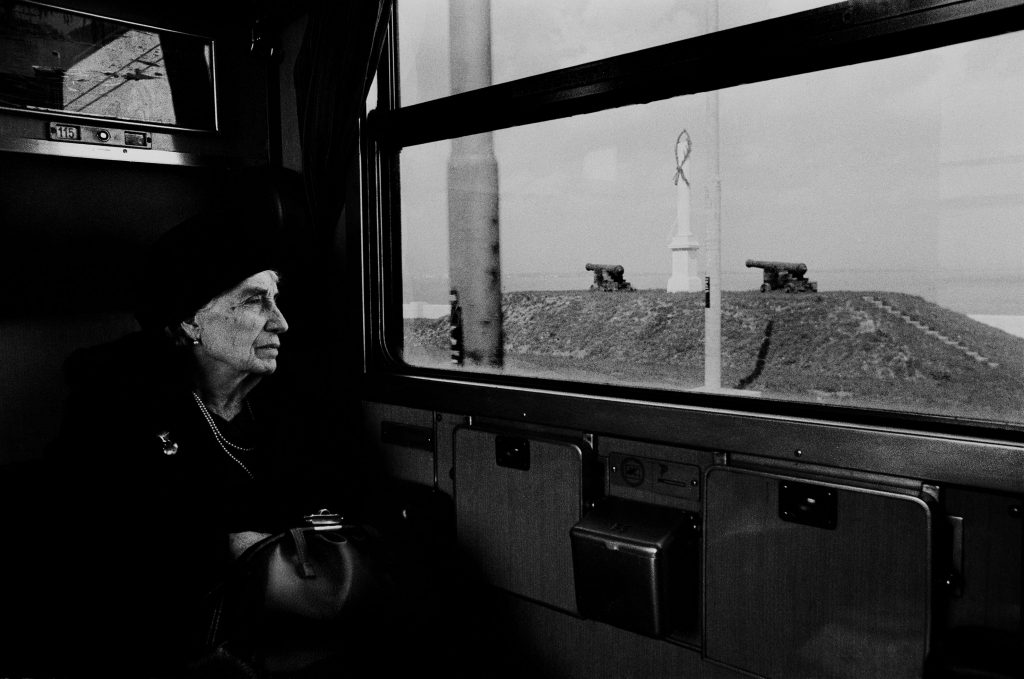 The ability that the photographer had, when shooting, to draw the observer’s attention to the intensity of a face and at the same time on a glimpse of a landscape seen from the train is extremely fascinating. There is a very strong and meaningful correspondence since it’s not just any piece of the world that he frames with the shot. Sometimes you almost get the feeling that it was the outside that led the game, that froze the long wait for the appearance and epiphany of a glimpsed or dreamt landscape.

I close the book, close my eyes and let myself be carried away by the overwhelming suggestion of these images, by the grandeur of certain figures, of bodies inserted within the frame of the carriage in a window pane, in the wing of a train corridor. Roberto’s gaze exudes humanity, is mixed with humanity. Although he has sneaked into the lives of young women, elderly people, sailors, couples, children, he is not a hunter of images; if he has stolen the intimacy of these people and registered their abandonment and their fragility, he did it with great empathy and certainly listening to them. A listening that has left an indelible trace in our imagination. 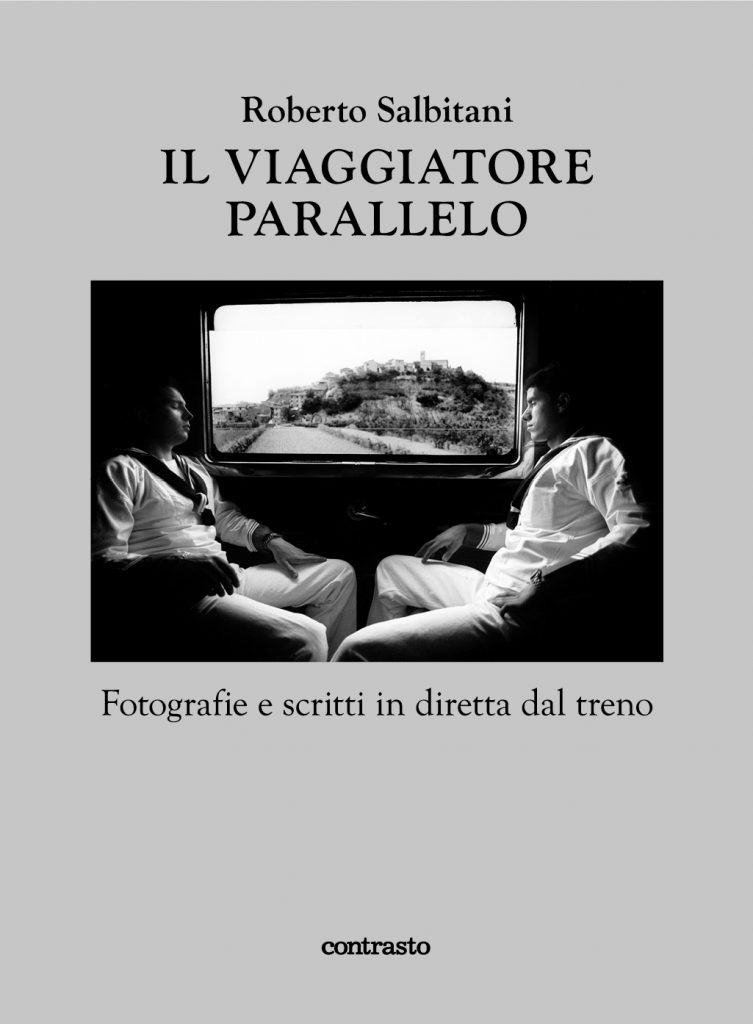