“I think that if I had gone to college I would never have become a director!”. This is how Stanley Kubrick introduces his precocious and brilliant activity as a photojournalist for the pages of Look, a bi-weekly magazine of costume and current affairs printed in the United States from 1937 to 1971.

With a more popular cut than its opponent, Life, sophisticated and attentive to great narratives, Look moves in everyday life by seeking proximity of places and situations with its readers.

It will be this proximity to people and their normality that will mark the gaze of the future director, encouraging in him that attention to the psychology of the characters and their story that will make him one of the most important filmmakers of all time.

One of his first works, How a monkey looks to people … how people look to a monkey (made in 1946, when Kubrick was just 18), proposes an interesting reversal of the conventional point of view of a zoo, anticipating that tendency to critical sociology which will be one of the characteristic aspects of future film productions.

Another trait that anticipates the director’s maturity is the curiosity towards human relationships that emerges in the small stories to which Kubrick dedicates meticulous attention: the disorientation of people waiting in a dental clinic (Dentist’s office: Americans are dutiful but nervous dental patients, 1946), an improvised street hairdo between friends (Bronx street scene: the camera catches an off guard episode over a hairdo, 1946), passersby caught in irreverent gestures (People mugging, 1946), life in penny markets (The 5 and 10: it attracts all types and ages, 1947), in launderettes (Wash day: Look visits a Greenwich village self-service laundry, 1948) and the absent look on the face of passengers on the subway (Life and love on the New York City subway, 1947).

Despite the simplicity of the context, Kubrick’s gaze penetrates and dramatizes all situations, exploring the characters with attention and interest: normality thickens and its protagonists emerge from the inert background to become to subjects of short stories, as in the hands of the best storytellers.

The dramatic capacity also emerges in the numerous biographies of famous professionals of sport – as in Bobby Ruffin and Willie Beltram (1947), Prizefighter: Walter Cartier is a young, strong middleweight struggling along in sport’s toughest business (1949), Rocky Graziano: he’s a good boy now (1950) – and entertainment, as in “Peter Arno… sophisticated cartoonist” (1949) and Faye Emerson: young lady in a hurry (1950). Here too, the official narrative of the public figure gives space to a deeper and more authentic look at the person, whose true and emotional complexity is revealed by the images.

Kubrick does not hesitate to pose his subjects, which anticipates the need for control of the detail that will subsequently manifest in the meticulous management of the film set and shows, from the very beginning, an extraordinary capacity for narrative construction. His sequences are logical and orderly, a canvas that, in the stillness of photography, follows the continuum of moving images. He describes perfectly the tiring life of a young shoeshine boy (Shoeshine boy, 1947), with a realistic and sympathetic style, but free from any rhetorical temptation. With the same intensity he tells the story of a young debutante (The debutante who went to work, 1950), caught between the intimacy of her moods and the official nature of the social game.

The photographs of young Kubrick, collected in the large volume published by Taschen Through a different lens: Stanley Kubrick, photographs, are a precious testimony of the precocious and extraordinary narrative ability of the future director. Already in these early works numerous elements of his future poetics emerge clearly, making this volume a fascinating journey back in the gaze of a young photographer destined to become a genius of cinema. 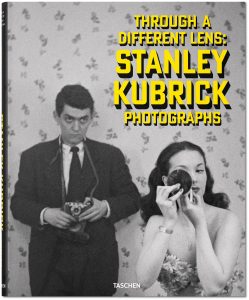 All images: Stanley Kubrick © SK Film Archives/Museum of the City of New York