It’s remarkable to see how much our perception of the English word “stories” has changed over the last few years. It is almost immediate today to think of Instagram Stories, social media, the rapid and impetuous contemporaneity of the new, and not so new, world of photography.

But here we are referring to something much more fascinating: disturbing stories, given to us by a great storyteller, a charmer of film. Wim Wenders is the author of the book Polaroid stories published by Jaca Books about three years ago. Wim Wenders is an acclaimed director, exponent of the New German Cinema, and also an internationally renowned photographer, exhibited all over the world. It is that same Wim Wenders who today signs an important co-curatorship, which looks at surrealism and the game of the cadavre exquis – a narrative element dear to the editorial staff of this magazine – of the exhibition currently underway in Venice at Palazzo Grassi on the photography of Henri Cartier-Bresson. We therefore focus on Wim Wenders the photographer and his immense Polaroid production.

Wenders loves to tell stories, he loves places, spaces. Between the Sixties and the Eighties, the director learned the art of cinema and found in the Polaroid a perfect complementary element to his research. This instant object is the perfect aid for the wandering storyteller, who stacks up visual notes, needs quick material, inexpensive and fascinating cameras, which produce images which he then studies, rereads, reflects on and plays with. Wenders writes in the book introduction that using Polaroids never seemed to him like real photography and that he associates that practice with something very funny, playful even, and often linked to pure chance and also to surprise, to suspense, “Time of a heartbeat: what will the image look like?”

The praise of the SX-70 is here a must, a legendary camera for Polaroid lovers, with an absolutely captivating design and impossible not to long for. Wim is strongly fascinated by it: whatever framed, was framed in the centre of the image. Each camera produces its own aesthetic. The result was a thing that you could hold in your hands which was an absolutely unique piece, without a negative to copy, in German a “Unikat”, a small square image in its white frame. Due to these specific characteristics, the Polaroid was a real object of art, original and unique. But, in front of this yet powerful link between the author and photography, he wonders: “Why make it into an exhibition or a book? Isn’t it just my memories? Who else could be interested?”. Doesn’t all this material “reveal that my life has been centered above all on the films I made and that these films have structured my existence, so much so that I can no longer distinguish between the two?”

The artist asks himself the most classic question: while he was learning his trade, was he perhaps learning how to live his own life?

For Wenders, keeping the private and the personal side of life separated has always been important since the two that are often confused, crossed by a subtle edge. He comes out with an extremely convincing reflection and pure wisdom: personal stories, imbued with real life, count because they also concern others, while private stories are useless and are of no use to anyone.

So the book unfolds in large chapters, which as in a time machine, take us on a journey with Wenders, of texts and images: through those, we embark on a long and very rich journey through his relations, his obsessions, the places and the characters of his films, his friends, the fundamental encounter with New York and the United States – the Campbell soups photographed in a supermarket as a tribute to Andy Warhol –, the America that fascinates and the America that disappoints, the coming back to Europe, the preparation of his films, the meeting with Annie Leibovitz, the sky of Los Angeles, his Germany, the acknowledgement of films that have become cult, such as Alice in the Cities, Wrong Move, Kings of the Road, The American Friend, the tributes, the love for Sesame Street’s Cookie Monster, Tom Ripley, Bruno Ganz, the skies and the clouds. Who knows if the observation and the repeated shots of these skies have led the author to the reflections for one of his masterpieces, authentic visual poetry, Wings of Desire, a little after the years told by this book (1987). We don’t know for sure, but we are almost certain. 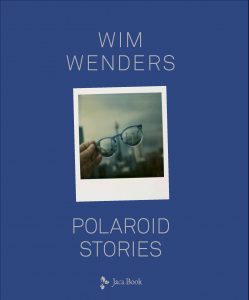