A few years ago I read a book that forever established, in my imagination, an indissoluble link between the words “multinational of chemistry” and “ tragedy waiting to happen”. It was Five past Midnight in Bhopal by Dominique Lapierre, and the multinational in question was Union Carbide, a pesticide producer, which was later acquired by Dow Chemicals. I refer to the book for the Bhopal disaster, in which thousands of people, who were already in a state of great poverty, lost their lives due to serious negligence by the management.

But the story I want to tell is another, and has as its protagonist one of the most important agro-food multinationals in the world: the infamous US Monsanto, the absolute leader in the production of some agricultural products, not least the vituperated GMOs.

The most effective story about this long history of social injustices and gruelling environmental struggles is the investigation by the Franco-Venezuelan photojournalist Mathieu Asselin with his Monsanto project. A photo investigation, tells the story of Monsanto that, from the beginning, has been known for the little transparency of its conduct, controversies with scientists and public opinion, investigations, cover-ups and scandals. Many were the unclear events in the history of the multinational; Agent Orange, a defoliant used by the United States in the Vietnam War, is one of its most infamous products.

In the investigation, carried out for five years, from Vietnam to the United States, Asselin documented how the effects of this chemical had dramatic consequences on the Vietnamese populations, up to the third generation. He photographed Americans suffering from diseases deriving from the use of chemicals for agriculture such as severely deformed bodies, children born without eyes or without limbs. This has involved entire communities. The portraits are very powerful, but without clamor: Asselin wants us to see things as they are, following a simple timeline. This is his mission.

No lawsuit filed against Monsanto was able to establish the truth about the group, because it seems that the company benefits from close connections with the US government, and in particular with the FDA (Food and Drug Administration).
The author therefore responds with his photographs, which tell evidence and are themselves proof of what happened.

At the same time Asselin thought it necessary to accompany these images with documents, procedural texts, newspaper articles, advertisements and memorabilia in order to make the story more complete, true, and the truth incontrovertible. The result is a long, powerful, very relevant and detailed investigation into the activities of the Monsanto “monster”.

Both in the exhibition and in the book, winner of many prestigious awards and sold out for some time, we are faced with eye-catching advertising posters, winning slogans, such as “The best way to tame a wildfire is with chemicals”, or drawings of Hansel and Gretel’s type candy house with the promise of a “Sweet Story”.

All of this accompanied by photographs showing vases containing deformed foetuses and stillborn babies, consequences of the serious repercussions of chemical agents on pregnant women. It does not seem therefore a sweet world what we are facing, but rather a nightmare from which we would like to escape.

A very strong project, which sets the pulse racing, but which we absolutely cannot ignore. We live on this planet, this is also our story. 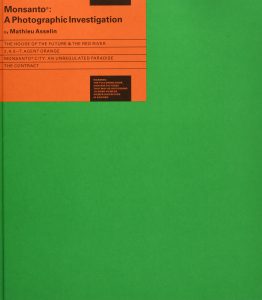