Parr’s career goes hand in hand with his love for the beach. In 1986, in fact, the author published the book that will place him in the elite of the greatest photographers: The Last Resort. In it, he shows the life of the average man on the shore of New Brighton, on the English coast near Liverpool, highlighting, in a sarcastic and ironic way, vices and virtues of his fellow countrymen struggling with beach life.

Since then, he has been constantly photographing people on the beach, traveling the coasts of the world. Among others: Italy, the United States, Japan, Mexico, Spain, Thailand, China, Brazil, Lithuania, and obviously Great Britain.

The one for the seaside is a real obsession for Parr. The author explains, candidly and with his usual sly smile: “In America you have the street, in England we have the beach”.

In the autumn of 2012 the book in which these images are collected is finally published: Life’s a Beach, a limited edition of a thousand copies, presented to Paris Photo that same year. It is an extraordinary book: family album format, hardcover, exposed binding, and a cover with handwritten title and author’s name. What is most striking at first is the presence, within the book, of real prints in a small white frame, as in a real family album, with little sticky corners and parchment paper between the pages.

The publication consists of 98 very colourful photographs, in which the author ironically presents the mass phenomenon of “sunbathing” and practices a sociological exploration of beach life, borderline between bad taste and absurd, between kitsch and the most genuine show of human nature, which we all reveal when we abandon ourselves to the crass, untidy, sweaty and awkward relaxation of a day at the beach.

The result is a systematic, non-judgmental analysis; after all, life is a beach, the beach is a bit like life, and in front of this we are all the same, when our toes sink in the sand, when we abandon ourselves to simple pleasures and we long for the moment when we dive into the water, we are all the same in every part of the world, universal and ritual in our actions, colorful and saturated, on bold glossy paper.

“You can read a lot about a country by looking at its beaches; across cultures, the beach is that rare public space in which all absurdities and quirky national behaviours can be found’, says Parr, but in the end he is also well aware that we do not care whether that particular photo was taken in China or in Ireland, rather we are interested in it being a photo of Martin Parr: extravagant point of view, bold focus, bright colours, unusual positions, muscular or fat people, both grotesque, but authentic. The prints are accompanied by a true touch of the publisher’s class: behind each of them, in place of the name or brand of the paper or a stamp with the date of printing, it reads: “This picture was taken by Martin Parr”. An absolute delight.

In 2013 a new edition comes out, perhaps the most popular one with the public. Life’s a beach appears this time in a smaller format, with a bright pink floral cover, and with the title and the author’s name written in golden letters. A copy that does not go unnoticed in bookstores! Inside, among the images of the beach, the design of the book recalls the bright colours of summer, the beach robes, the towels, the funny bikinis. This time the photos in the book are not prints, but the aesthetics of the snapshot remains, the aesthetics of an image captured by a curious gentleman who wanders around the beach with the camera, wearing sandals and a fisherman’s hat. A gentleman who is a profound connoisseur, not only of his country, but of human anthropology, of customs and traditions, of twitches and rituals, who greatly amuses us with his photographs, but continues, above all, to have fun and, thank goodness, doesn’t take himself, or any of us, too seriously. 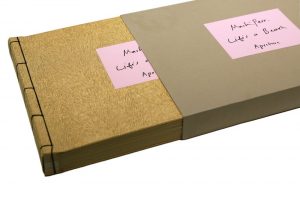