Anything that looks like an idea is probably just something that has accumulated, like dust. It looks like I have ideas because I do books that are all on the same subject. That is just because the pictures have piled up on that subject. Finally I realize that I am really interested in it. The pictures make me realize that I am interested in something.
Lee Friedlander

Looking through is an innate concept in the history of photography and implies that the gaze on reality is mediated by something else, something that is perceptive as much as it is objective, so as to turn the translation of the sensitive world into a new atlas to be studied and discovered. “The images make me understand that I am interested in something”, says Lee Friedlander and it is perhaps this idea that leads us to a path not yet traced to make it our own, delineating its gates and boundaries. Because if traveling is maybe an innate act of human nature, imprinting a trace of that traveling is probably the need to weave a mnestic plot of one’s life.

A plot that I guess was also unraveled when Lee Friedlander published the extraordinary book America By Car, in 2008 – whose images were the centre of some important exhibitions in the United States – rightfully part of the history of contemporary photography. A journey that, backwards, has branched out across 50 states, following an essential quid: photographing America from a car, hired for the occasion by the Aberdeen photographer. Indeed, that “by car” becomes here a true philosophical concept at the basis of Friedlander’s investigation, a deliberately and openly chosen approach for that journey to discover a country and its landscape, always different or often similar, united by a sort of archetypal shot.

If we reflect, the roads and the car, or even the journey along infinite motorway routes, bring back to the collective memory the iconic image of the United States outside the big cities. Friedlander, however, goes further, representing the USA through the perimeter of the car’s side and rear-view mirrors, its windows and windshield, a space to which to entrust an anthropological story, supported by a disturbing vision that recalls that of David Lynch, aimed at narrating through photography the advent of the 2000s in the American landscape and society.

“At this point, however, glass architecture must also be transferred to moving objects, such as cars […] in this way the landscape will radically transform” reads that dream that became an essay by Paul Scheerbart in 1914, Glasarchitektur.

Thinking back to this essay from the early twentieth century, observing Friedlander’s shots takes on a rather peculiar, perhaps unexpected, connotation. Each image embodies a diarchy: the camera sees for the photographer, who, at the same time, has chosen what the camera should see and how. The ontological punctum recorded in the shots of America By Car is contained in this apparent dualism. To the wonder of the unveiling by a glimpse or by provoking combinations and compositional cuts, Lee Friedlander combines a narration of the American symbologies par excellence, leaving it open to a sort of sabotage of the collective memory, showing an intermediate limbo in which the eye moves in the space which is itself enclosed in a pre-existing frame.

To the greatness of the Made in the USA, Friedlander opposes the small universe of the automobile, an indicative vector of human movement, a link to the world yet to be conquered. Yet Friedlander is not interested in becoming a master of American immensity; rather, his research chooses a combination that abandons the rigid semiotic composition of certain landscapes, to redefine them in a new function.

The inside communicates with the outside, being parts of the same close relationship. What the photographer sees, and us with him, is inhabited by other elements that interact with the landscape, in which, often, the use of mirrors or glass surfaces returns a reflection of what lives, moves or remains motionless down there. This way, that “looking through” mentioned in the incipit also suggests something beyond the already known, beyond the obvious. Yes, because among the details of the car chassis, the familiar curve of the steering wheel or the imaginative recreation of the subject by the mirrors, each shot returns a new architectural construction of the States. The construction of the entire work itself does not follow geographical stages, but thematic ones and Friedlander groups the shots according to the subject: monuments, churches, houses, factories, ice cream parlors, plastic Santa Claus, memorials along the road. Everything, then, gets enclosed in a further frame: the square cutout, in black and white; 192 images unravel a thread that finds echoes of works from the past but which, above all, bring a new breath and new, engaging lines.

The fascination for what the photographer records and reports through the moving car, implies a suspension of a scenic nature as if the observer was in front of frames of a longer film, unwinding along the cardinal points of the United States. This way, the ultimate sense entrusted to each fragment takes on a choral role, both of a  compositional and aesthetic matrix, in the deliberate representation of a “frame”, and of an intellectual matrix, capable of generating unusual combinations, surprising pieces of an invisible larger puzzle. The car and its elements thus rise to represent a real optical device, a privileged lens of investigation into space, and its conquering by the hand of man or the encounter of man and nature.

The games of asymmetries – games of extraordinary seriousness – tell of amazement, of laws for newly invented looks, of otherwise revealed realities, able to stage an America that is always too far from the spotlight and bearer of a subtle irony. An irony that Friedlander’s street photography had been carrying around for years, ever since someone wrote that his images sometimes portrayed “trivial subjects”. From what some considered “banal” he, with illustrious colleagues, allowed this formal grammar to become a justly recognized photographic language, transposition through images of that literature “on the road” which showed the urgency of narrating the space of experience. In the genesis of its change, of its urban and human reflection. In fact, the concept of mirroring, which has always been present in Friedlander’s choices, acts, in some way, as an authorial signature, as does a certain black and white.

Then, of course, Lee Friedlander became the name we all know, with no need for further introduction and his gaze is that of the many who try to understand more of the United States and of photography. Like, for example, the fact that the main eye of the artist – photographer or writer – has the ability to anticipate the times, to foretell the future. Looking at the shots of America By Car, we think of Friedlander in his car, for thousands of miles, shooting through a sort of visual camera, as the only way to be able to interface with the outside, with the other from himself. Doesn’t it seem similar to the way that, today, in the shadow of the upheavals brought about by Covid-19 in our habits, we look beyond the safe bubble of our home? That untouchable “outside'” from which we defend and observe at a safe distance. This, of course, is only a further distortion of the scene, a deeper distortion of the reflection of reality, of observation through a choral media that has little to do with Friedlander’s journey through America but, certainly adds a further perceptual level.

And after all, if you re-read certain shots, they become a timeless journey, far from what we would do today, but very close to what we would have liked to do, alongside the photographer, around the States. Here, therefore, that America By Car is transformed into an archetype, an icon, an imaginary so revealing of something that pertains to the fantasy of the US road trip that it becomes a sort of sacred book of photography.

Fifteen years, fifty states, almost two hundred shots, the American soul beyond the glossy one, that is America By Car, a visionary exploration that loves to build layers of miles, roads, cities, lives, in the tension of an alienating evocation.

“I always wanted to be a photographer. I was fascinated with the materials. But I never dreamed I would be having this much fun. I imagined something much less elusive, much more mundane.”
Lee Friedlander 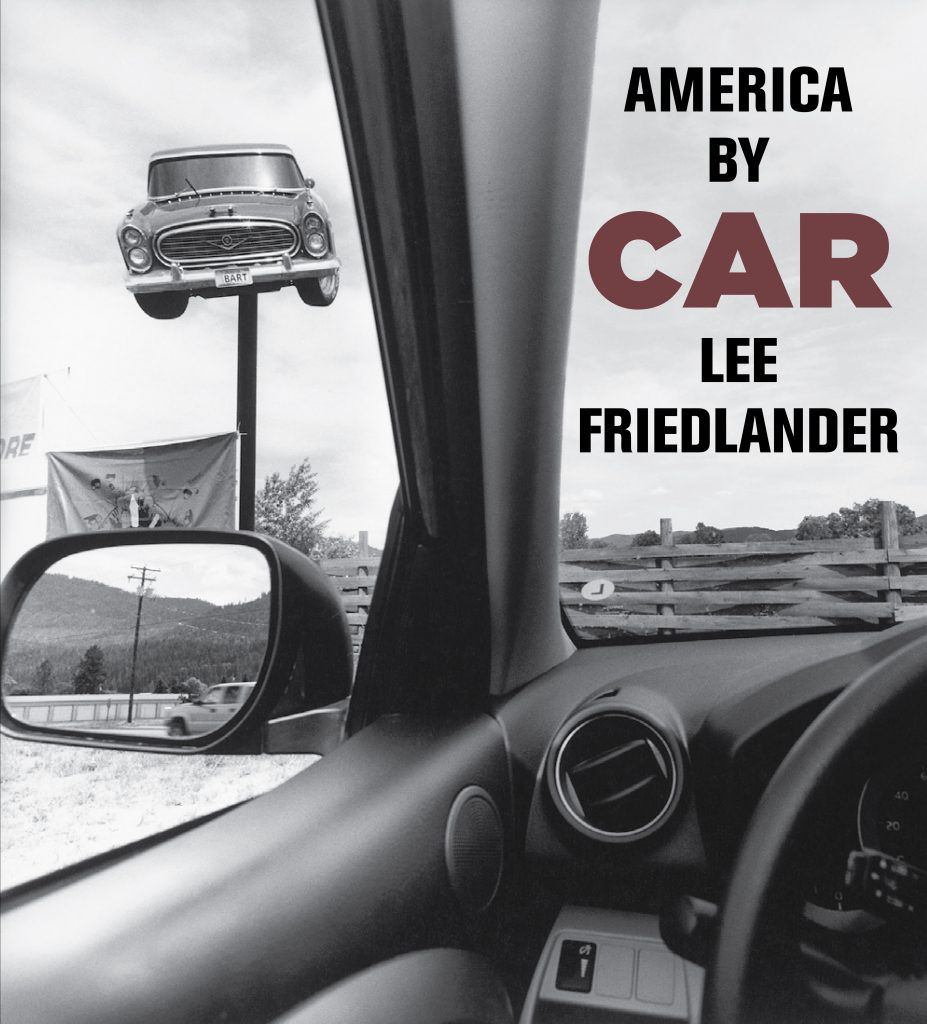