The foundation of all aesthetic sciences is anthropology.
(Friedrich Schlegel)

In constructing an aesthetic language, in the reasoned composition and mixture of myth, symbolism and metaphor, Gillo Dorfles, following an actual itinerary, relied on Schlegel’s thought, entrusting the aesthetics with a reverse reading of life. The reflection, taken in an interdisciplinary context, arises spontaneously when looking at the complex research of Francesco Faraci an anthropologist, sociologist, writer and photographer from Palermo. He does not like to call himself a ‘”photojournalist” and, probably, with none of the terms just mentioned, as he is not interested in aesthetics per se in his photography.

Francesco Faraci is an attentive observer, known to the general public for Jova Beach Party. Chronicles from a new era, and as an anthropologist he dives deep into the reality he chooses to tell, arriving at what we would call “field research”: stripping himself of any prejudice, he chooses to “listen” to what he “observes” by investigating the human side of what he will end up photographing. Faraci admits that his life was made by encounters and this is what his photographs bring about, a compendium of our time, of the ones among us, near or far as they might be, who have a story worth telling, capable of permeating not only a photograph, but all that it contains, a haughty, alienating, often incomprehensible universe, but worth understanding. What? The epitome of feelings, a geography dotted with souls that the lens has captured, without separating its roots from the synchronic and diachronic poetry hidden between the chromatic contrasts – metaphorical – compositional.

I was gifted with the latest book by Francesco Faraci, Sicilian Human Atlas in the very first days of the Italian quarantine, just when I was immersed in studies of anthropology and psychology. Probably, the unexpected lyricism of these encounters resides in the same poetry that generates the plot of a vision and the moment of a perfect photo – or perhaps, it is only the magic dictated by us born in 1983!  However, after reading in one sitting the text part of the book, the words of Grazia Dell’Oro, Francesco Cito and Faraci himself and after discovering a harrowing Canto written by the photographer from Trinacria, calling him to talk about this work, and that ode, felt only natural. 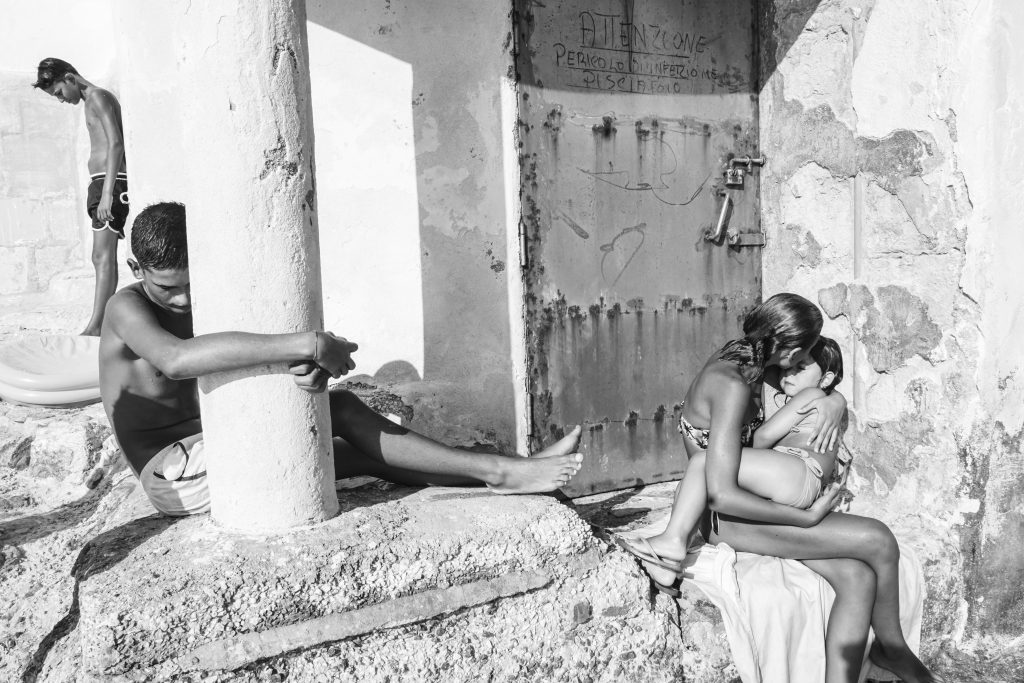 Francesco, Atlante Umano Siciliano is a love story told through photographs, a tormented but visceral love, one of those we can’t live without. Why did you choose to tell this Sicily? Because it was barely known, truer, or because it is the bearer of an otherwise unexpressed dignity?

What is love, if not torment?  There is always that subtle anxiety that accompanies it, those questions that will never find an answer, even if you keep looking for it. Yet without love, the universal love that embraces the things of the world, one cannot live. Sicily is my land, the place where I was born and raised, the place where, after much thinking, I chose to stay, as a form of resistance. Mine, of course, but also that of many others. From here I look at the world, from here come the ideas and thoughts that guide my work.

During my wandering I was accompanied by a group of gypsies, who in some ways opened for me a window on the fantastic, on the imagination that is created once the threshold of neorealist reproduction has been crossed. As if the sphere of the dream had crept into the representation of the land. It was not me who chose the places, but I was chosen by them. It was a matter of finding little-known territories, driven by my desire to be free to move about, without superstructures and judgments of any kind, opening myself to the unexpected, to a surprising exchange of glances, to the dignity of fishermen and farmers, to the wisdom but also to the harshness of the elderly, to the grace of the children and young people, to the authenticity in the face of a passer-by. Sicily a not found island. This is how the Atlas was born, between one dream and another.

Atlante Umano Siciliano, as can be read in the incipit, refers, in its anthropological and photographic context, to a “frontier place”; what have you seen “on one side and the other” of this border?

Sicily is a frontier. The gateway to a world as far and as close as Africa. For some it is the front door, for many it is the near certainty that they are safe. A dream of Klondike in full Gold Rush. When migrants see it on the horizon, they know it is not Morgana, but the port where they can start a new life after escaping from war and poverty. From this side, I saw a place somehow frozen in time, which believes in saints and in the cycle of sowing and harvesting, in the changing of the seasons. I have seen resilience and sometimes resignation. I knew death and life, I photographed them and treasured their lesson. For a moment, I saw clearly what it means to have roots. I rediscovered memories that I thought I had forgotten. Sicily is the horizon hiding the limits which we try to overcome to go a little further, to move towards evolution. The elsewhere is always a surprise, a door wide open on the future and from here I can see it. 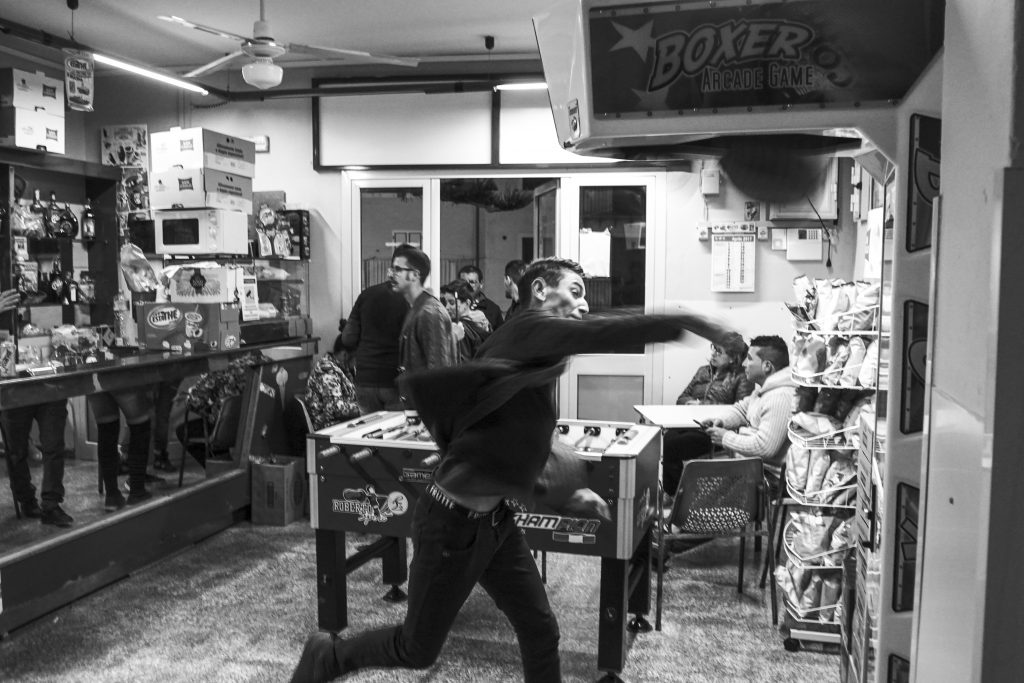 The black and white that you have chosen for this visual narration animates the contrasts that have become subjects of your shots. Leaving aside, for a moment, the aesthetic values, could you tell us what guided you in choosing your protagonists?

Thank you for leaving out the aesthetic values. Just as it happened for the places I visited, the encounters were also dictated by a sense of “recognition” of myself in others. In every photograph there is a part of me and this happens because even before the physical act of taking the photo, just a moment before, an inner shutter pulls at distant strings inside of me, in an unidentified area of ​​the soul that gives birth to an archetype, an image already seen in a time that I cannot define but that I am sure I have experienced. And there come the contrasts, which are mine, but also those of everyone’s life.

The subjects of your compendium, of your Atlas, belong to a world often far from the story of “Sicily”. Were you able to show them the result of your journey as a guest of their lives? What was their reaction?

Unfortunately, it was not possible to show everyone the final result. I have not yet managed to return to certain places, especially the more distant ones. However, I showed it to the ones I could reach, to my gypsy friends for example, and their reactions were always different, but all positive. I hope to be able, in the future, to show it to all those who gave me the opportunity of a photograph and I am sure that time will come.

Inside the Atlas, your “Canto della Terra”, a touching poem you dedicate to Sicily, is printed on red paper. Verse after verse, without ever being pedantic, you unravel the history and the stories of a mythical land. Was it born together with the photographic project or does it come from your archive?

Canto della Terra was born on the road, moving from one place to the other. I always carry a diary with me and there, taken by my thoughts, I wrote some verses, something that I hadn’t done in a long time, which then ended up into my dedication. Those words followed my movements, they adapt to the current of emotions, smells and sensations that I have experienced over the past three years. They were written on the seat of a car, on a bus, on the ferry crossing the strait, inside a mosque, on the beach. 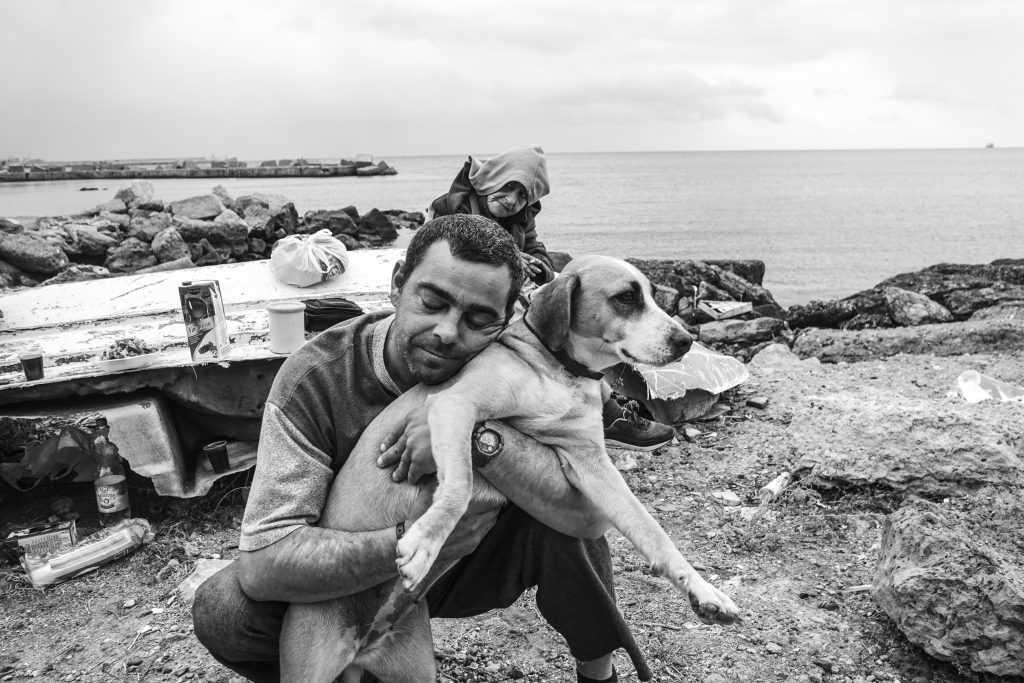 Your visual eclecticism certainly has roots in your socio-anthropological training, and never ceases to amaze the public through Pindaric photographic flights. What are your plans for the future?

In these surreal days, I have been involved in a project of which I cannot talk about yet, a project which will take me once again along the streets of my city, obviously with the necessary authorizations and taking all possible precautions. I immediately felt that if I hadn’t done something to document those streets, because that’s what photographers do in the end, whatever I had done before and whatever I will do next would not have made any sense. I have just finished working on a novel – and I don’t know when it will be published, as the emergency has rightly stopped everything – and now I am collecting ideas, writing a diary of what I see and hear these days. I have several plans in mind for the future, but now the present looms with all its arrogance and we have to face it and deal with it. 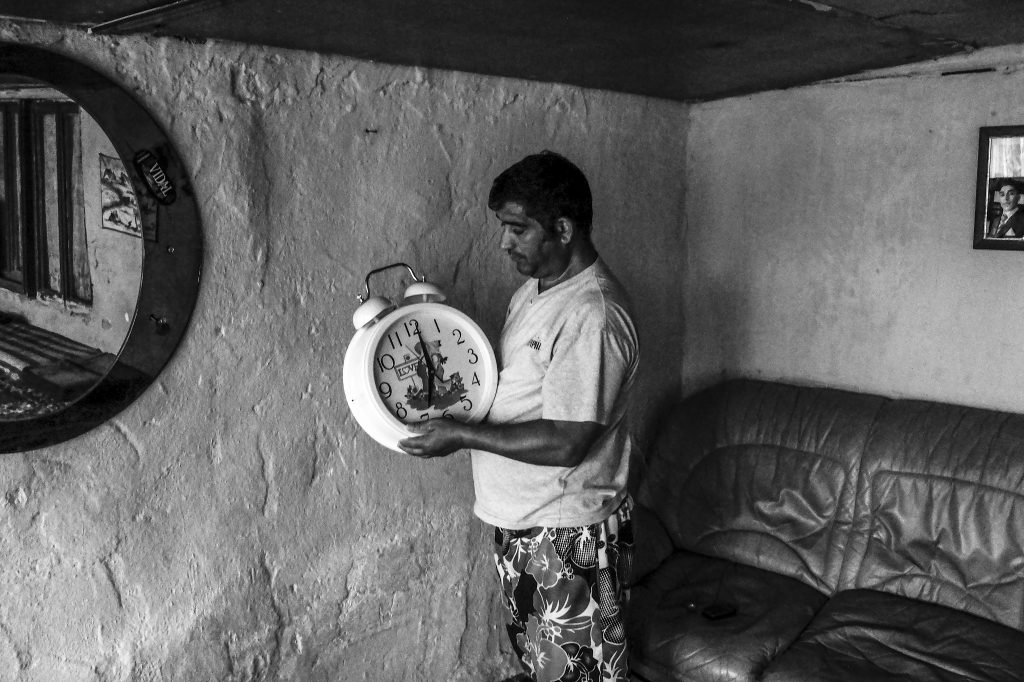 Days ago Francesco Faraci, live on Instagram, said that “we are making history” almost without realizing it – but soon, you will find out that he has been entrusted with a truly epochal task – and, this, without a doubt,  will remain forever in our minds. We were certainly not ready for anything that happened. Here, therefore, that as I write this Focus on,  images of the Sicilian Human Atlas and of that continuous and silent struggle of which they are sometimes infused, come to mind. They are the perspective of a before and an after; lives, faces and stories that are like the frontier of our life and not only because they tell of the magmatic insides of Sicily, a mythical place, but because they are stories of a different limit, not only physical, not only geographic, but of a unique force, otherwise unspeakable, yet naked in front of itself.

Francesco Faraci, in the last verses of his Canto, writes:

Maybe we will be more tired, the hair you know gets white, the face dries up,
but the unusual question of living is waiting to get drunk with wonder,
with us.
We will talk about missed opportunities. We will say uspoken words,
of passing trains.
From tomorrow we will know that nothing is lost, ever, that we will continue to love the road and getting lost
and we will find that what we called pain that day was actually
a suspended time.
We will leave out hell, the muzzle of angry and slobbering dogs
fear of words
and in this land of exile, at the crossroads of peoples
on the Mediterranean curve,
love will come again in Sicily tonight.

Reading it today, it cannot be denied how much his Song of the Earth gains a universal value; turning the pages of  the Sicilian Human Atlas makes it close to the intimate geography of each of us, demonstrating, if still necessary, how much the eye of a photographer, of an artist, can grasp, with prophetic investiture, the meaning of life. 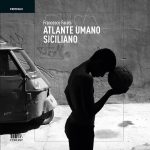