Could you ever imagine that, in the 60’s,  number 110 on MacDougal Street – a sort of beauty centre that offers manicure and pedicure services –  was a meeting point for folk musicians, the place where Bob Dylan spent many of his early New York days? And that in an anonymous white building, located on 105 Bank Street in Greenwich Village, lived John Lennon and Yoko Ono? Almost certainly not, because you have not yet read New York Serenade, the book published by Skira in 2017, which has had and continues to have considerable editorial success.

A book that retraces the golden years of musical history in New York and that combines the images of Ciro Frank Schiappa with short texts by Michele Primi, a book which tells us – among other things – of the genesis of a song’s lyrics, introduces us to the place that has seen the embrace between two icons of rock music, shows us the red brick facade of the first house where Robert Mapplethorpe and Patty Smith lived at the beginning of their sentimental and artistic partnership. And which tells us what was it there.

If I had to summarize the meaning of the project of the two authors, I would use this sentence by Joel Meyerovitz, mentor of Schiappa, taken from his precious introduction to the book. The great American photographer underlines how Schiappa and Primi’s merit lies in having materialized a path of memory; in having searched among the folds of a city difficult to represent like New York what was and what remains of a spirit, of “that” sacred fire that allowed musicians of the calibre of Patty Smith, Leonard Cohen or Iggy Pop to find their own sound, their own voice and to take it all over the world.

With an analytical but at the same time loving attitude, the two authors went in search of places connected to relevant moments in the history of rock, from the early fifties to the present. With intelligence and dedication, with a rigorous but light-hearted method, they provided information, leaving room for suggestions, insights, further research, even one of emotions.

An ambitious project – carried out over four trips in two years to the American metropolis – and extremely courageous as well, because the two authors have decided to invest time and resources by self-financing the research, with the aim of linking apparently anonymous places in New York to the history of rock and to our musical imagination.

It all started in winter 2010 when Schiappa and Primi – neighbours in Barcelona, both rock lovers and who had already worked together for Condé Nast – decide to start this mapping of New York. The two authors worked in synergy but with autonomy and respect. Ciro Frank Schiappa recounts how the distinction of roles and intellectual independence favoured mutual creativity, even if the two authors then worked in close contact planning shifts, requesting permits and even filming.

Using a 20×25 optical bench the photographer needed to be supported to manage the heavy and very visible equipment. Michele Primi, with enthusiasm and availability, took on this burden and proved to be an excellent “assistant”: capable of supporting but also of being silent, of leaving room for Schiappa’s search for the poetic quality of places.

“It was a very stimulating team work” – says Schiappa – “even if at the beginning, having an already defined look on the city, I was afraid of being contaminated by an external vision. Even if Michele is a friend, I was afraid that the times of photographic research would not be respected, as – as we know – they are long to allow the gaze to decide what to dwell on. Instead, even the moments of silence between me and Michele were natural, fluid. I always felt free to observe calmly.

Between us there has never been a disagreement on what to photograph or on the fact that sometimes, in places where we had arrived with some effort, I didn’t feel like shooting because I couldn’t find anything that excited me. Michele blindly trusted my choices also because, after the first trip and the first contact sheets, he realized the quality of my photographs. The book reflects this harmony and also the interesting encounters with people during our travels, on our long walks. There was a lot of curiosity about the large optical bench, especially in children.

We have never experienced stressful or dangerous situations – adds Schiappa – not even in neighbourhoods like Brooklyn or Harlem where we were the only white people. We have always had the greatest respect and people have perhaps understood our motivations. When we photographed the Apollo Theatre, people stopped us and told us that we had to show at best what that place meant for rock music… In New York, on the street, you can photograph freely and there is a lot of helpfulness, especially if they understand that you are not a paparazzo. The problem arises as soon as you try with an interior. Then you have to ask for permits, to have the consent of the whole building.

We have experienced such an intense relationship with the city that I often felt the need to photograph the people we met on the street, to include them in the project. Strangers chosen on the basis of instinct, on how they looked or walked, were placed in front of landmarks, previously chosen, which were significant for the history of rock: great freedom, a way to escape from the net of a conceptual and rigorous project. Michele understood my needs and supported me. After all, transgression, the breaking of a pattern is intrinsic to the soul of rock music…”

The conceptual approach implies an important reflection on the power of the gaze, on how information, emotions and collective imagination are capable of transforming the apparent ordinariness of urban spaces into something different, new, sometimes even mythical. In his observing the photographer selects and demarcates the reality that surrounds him and in so doing intervenes, even if in an immaterial way, on the landscape, transforming the places. After this book, certain corners, certain streets of NY will no longer be the same, will be loaded forever with a further meaning, linked to the lives and stories of all the rock musicians who have passed through there.

In giving us back a modest and “normal” vision of the Big Apple, New York Serenade purifies the gaze from the stereotypical image of the metropolis, made of skyscrapers, traffic, people in constant movement; it stresses the ordinariness of the places, the importance of which both Cesare Zavattini and Pier Paolo Pasolini spoke of finding interesting things to photograph anywhere, even in the apparently unimportant places.

The gaze and method of investigation are linked to the great tradition of American documentary photography, which Schiappa knows well and in which he recognizes himself, but is imbued with the new awareness about the change of the perception and codes of representation of the world. We must not forget that Ciro Frank Schiappa is European and this different background pervades, even if subtly, the whole project. During our conversation, Schiappa mentions Eugene Atget and Walker Evans and, among contemporary photographers, one perceives his closeness to authors such as Alex Soth and Stephen Shore.

There is, therefore, something more in this marginality, in this “any” which they described. To use an expression of Guido Guidi, one feels that, in this project, the photographer has left the shoes of the tourist to wear those of the pilgrim. One feels that the question which has nourished Schiappa’s gaze has managed to show the presence/absence of photography and that “from the silent expanse of things a sign, a reminder, a wink has started”.

It is the photographer’s question that produced one of those fortunate coincidences in which – to quote a beautiful story by Calvino – the world wants to look and be looked at in the same instant. 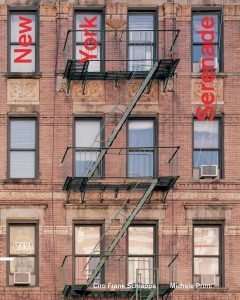