What is the purpose of technique in photography?

For those who do not know what to do with it, it’s mainly to confuse and distract.

To have a further control, when it’s needed. But when is it needed?

In 2015 Leica presented the new mirrorless SL. A 24 MP capable of photographing at 11 frames per second or shooting 4K video. The body appeared clean and minimal, a few buttons and a few dials for a simple and intuitive use. It allowed the photographer total control of the scene, without distractions but with precision and personalisation.

We know the advantages of a mirrorless: silent operation, optical optimization, excellent system integration with all lenses, shutter speed, reliability. But our intent is to study the intrinsic qualities of a camera, to go and find out what our designers put inside the heart of a photographic system. In addition to what we see in terms of composition, exposure, shutter speed, focus speed, could we miss something? That something which, when we examine the image in further details, exposes a problem so important that we are forced to discard the photograph.

What unusual occurrence could happen to us on which we have not had full control? A poor focus where we needed it perfect!

We have many methods of autofocusing that allow us to control every little movement, but it could happen that one day the customer asks us for a print 2 or 3 meters wide. And, on that kind of size, we realize that our subject is slightly out of focus, either because in that context we needed a larger depth of field and we didn’t choose the right diaphragm, or the main subject is slightly blurred because the autofocus has hooked another less significant detail.

How to avoid these annoying problems?

Who comes from the use of the optical bench, in particular Sinar, has a total control of the focus: the farthest point, the nearest point and the final regulation in the pre-set position. When you get to photograph in a smaller size like a 24×36 you do not have the tools to do this check and the focus is done more roughly. This happens both due to a lack of specific systems but also due to the reduced size of the camera display which prevents us from being able to visualise certain details and evaluate them carefully.

Is it possible that Leica has not thought about solving such a bothersome problem? We have read the brochure of the Leica SL over and over again and there is no evidence that a check has been carried out in this respect.
But looking further through all the features of the SL, we discovered a function that perhaps no other camera has and which is not that precise and simple to control. 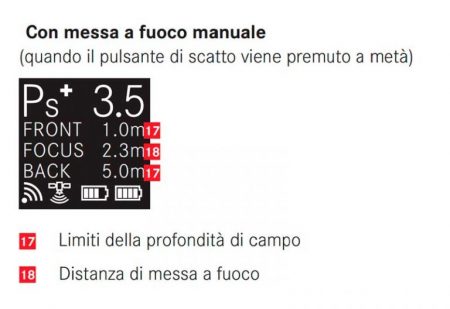 If you go into manual focus and press the shutter button halfway down you’ll see 3 values expressed in meters: the distance from the closest point in focus, the distance from the furthest point in focus and the setting on which you are positioned.
So, since we have the depth of field expressed in meters, all the subjects in that space will be in focus allowing us to control the area in focus, both to get sharpness on the main subject and to obtain creative effects on the areas that instead can be out of focus.

Who will find this useful? Photographers of architecture, of still-life, action and sports photographers, everyone who must obtain certain results especially for all those scenes that cannot be repeated and where you’re allowed one shot only, in addition to all of those who direct their imagination towards creative horizons.