In the short, but intense page, with which he introduces his work in the book Embracing Imperfection Franco Marinai states: “I decided to collect and print in a book those exact negatives that I had mistreated and discarded, what I would never have considered worth printing fifty years ago. It may contain traces of memories, regrets and happiness. “

It is a beautiful declaration of intent on the profitable and unconventional use of photography. Above all, of his mistakes that are recovered by the author in a poetic capacity, as activators of feelings, emotions, as witnesses to the fragility of life and of memory itself; favouring, moreover, the reflection on how the author’s gaze, changed over time, has determined a re-memorization of the same photograph and allowed to restore life and dignity to material labelled, once, as to be discarded.

A new awareness of the creative potential of error and chance, the great inspirer of the surrealist movement, has in fact changed the trajectory of glances. Several negatives have been accepted in their imperfection and led, through this book, to a resurrection: scratched, mouldy, burnt, badly fixed and preserved, they were part of a tangle of black and white films, taken and developed by Franco Marinai between 1965 and 1969 and then forgotten for almost 50 years in the cellar of the family home in Castello, near Florence. 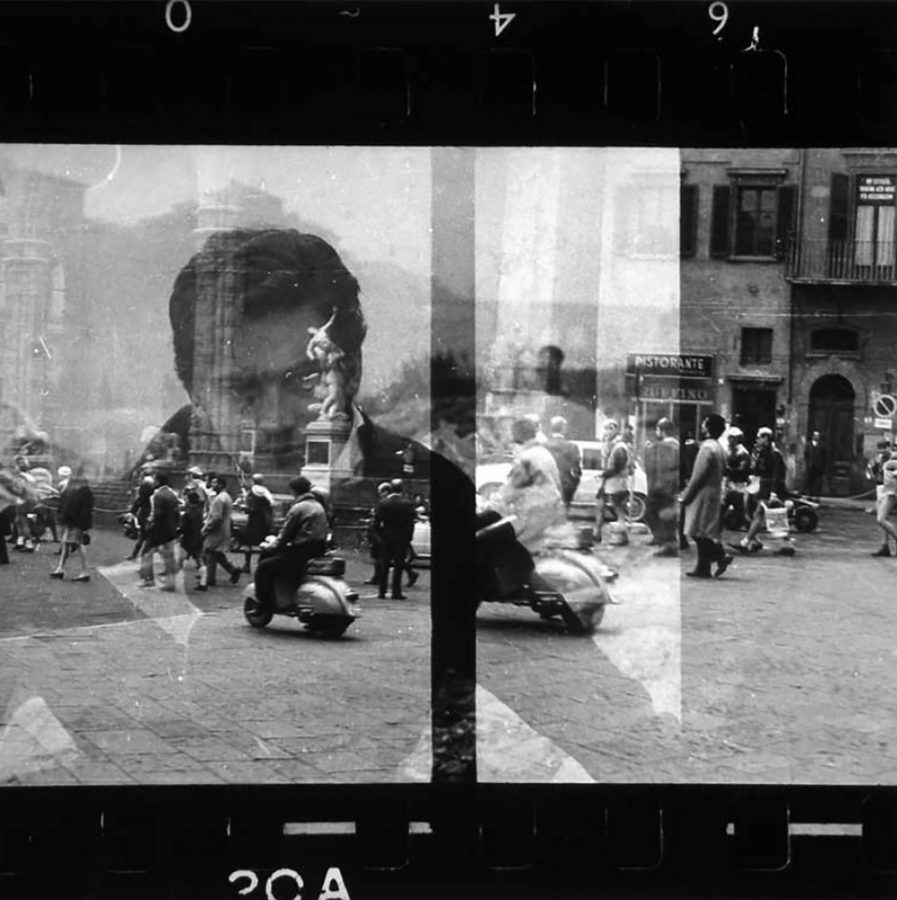 Marinai belongs to that group of artists who, starting from the early twentieth century, with the practice of ready made dear to Duchamp, Man Ray, Schwitters and the Dadaists and surrealists, have worked on multiple fronts to erode the concept of original, work of art, authorship.

An approach that has questioned a lot the reuse of materials, the re-appropriation of objects and images found or taken out of the artistic context. And that even today is extremely vital, as shown by the works of Sherrie Levine, Joan Fontcuberta, Joachhim Schmid, Paolo Gioli, Moira Ricci. At the basis of this practice there is a double reflection on the mode of artistic creation and on the unnecessary nature of technical perfection, which has paved the way for conceptual art, claiming the value of the gaze and mental selection in generating a new creative potential.

Embracing imperfection is his most recent project but in Franco Marinai’s artistic practice there are numerous examples of re-appropriation of images produced by others, anonymous images on which the artist intervened with writing, deletion or underlining of some details.

Photographer and videomaker, Marinai was first interested in photography at the age of 14 when, in the attic of the family home, in Castello, he found the old photographic equipment of his maternal grandfather and, fascinated by the discovery, he set up a dark room in the cellar, in what was once a coal deposit, starting to tinker and mess around and to experiment with old films, photographic papers and chemicals, obviously by then expired. An initiation that will indelibly mark his approach to photography and that will make the process, research and experimentation the most important phase of his artistic activity. Even when, in the eighties, he approached experimental cinema, he treated super 8 or 16 mm films as a surface to work on. And he did so by painting, scratching, dyeing and whitewashing because the transfiguration of reality, mixed with discovery and invention, are the main objectives of his artistic practice. 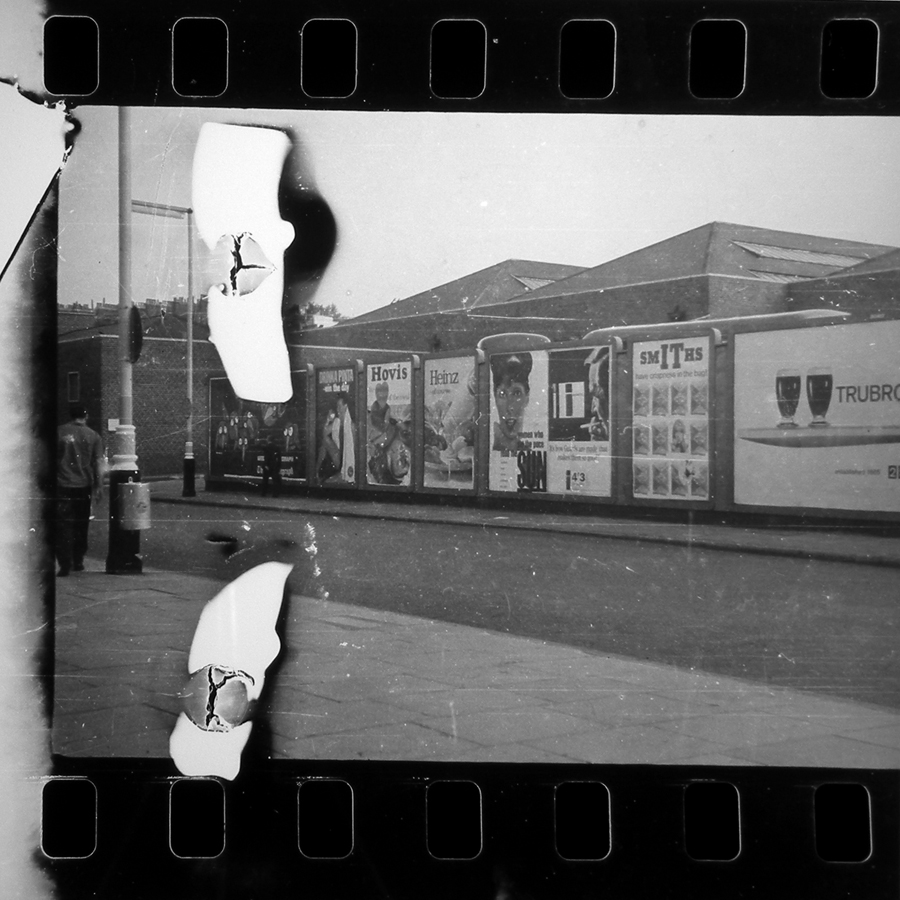 These photographic disasters – as Marinai himself calls them – published in the book also tell us about of analogue photography, of a material and non-rarefied object, unlike the ones we are used to in the digital age. A materiality made of films, emulsions, chemicals for development and fixing, papers, enlargers, dark rooms, water, darkness, mystery, wait.

In analogue photography the theme of water, of liquid chemistry is very intriguing because it establishes – as Jeff Wall pointed out in one of his essays – a very strong connection with the past, with time. Indeed, the archaism of water incorporates “a memorial trace of very ancient production processes (…) practices related to the origin of techne”. The echo of water mitigates the dry part of the photographic process made of optics, mechanics and in fact water is an integral part and constant presence, from the origins, of photography. An integral part of the mystery of vision – “it is in the vitreous humor of the eye that the image takes shape” writes Jeff Wall again – but also of the mystery represented by the phenomenon of the latent image, which introduces photography into a magical dimension and which turns the photographer into a shaman.

Several scholars and photographers have attempted to verbalize the unspeakable emotion of this magical presence, first of all Susan Sontag who in her timeless essay On photography, already in 1977,  emphasized the dual nature of the photographic image by highlighting the priority and almost magical indical aspect:

“Photography has resurrected” in completely secular terms – something that resembled the primitive condition of images. Our irrepressible feeling that there is something magical in the photographic process has an authentic foundation. (..) Photography is not just a representation of its subject, a tribute to it. It is an integral part of it, it is an extension of it, and it is a powerful way to acquire it, to ensure control over it “. On the same wavelength, and in the same years, the reflections of the French semiologist and philosopher Roland Barthes who in La Chambre Clair, his last and most touching essay, wrote: “Photography always amazes me, and it is an amazement that lasts and is renewed, inexhaustibly (…) Photography has something to do with resurrection ..” 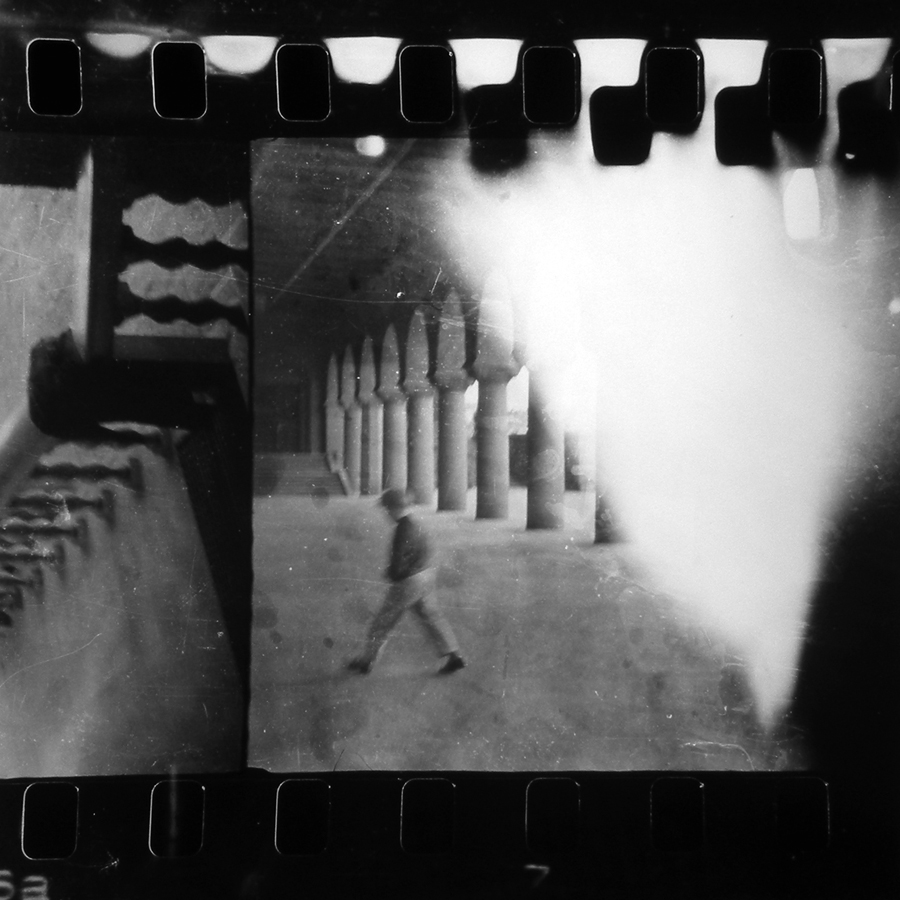 The magical aspect of analogue images is also connected to the concept of waiting, which can last a long time before the photographer develops and prints the photographs, thus favoring a kind of indeterminacy that feeds uncertainty and desire. In the case of this project, the theme of waiting is – I would say – central since the artist had to wait 50 years to be able to resurrect pieces of memory.

The materiality and fragility of analogue photography is another aspect that Franco Marinai is interested in but not for an interest in the conservation of photographic materials, as one might  think. His attention is focused, on the contrary, towards everything that is defective, wrong, which contains errors related to the photographic process or to the care and conservation of materials. The fatal attraction for error and imperfection is a recurring theme and this time also led him to select among the 40 and more negatives, found in a dusty tangle of film, the scratched, moldy, torn, ruined images by the wrapping the spiral or by camera malfunction.

To describe Franco Marinai’s approach, we can use the words of László Moholy-Nagy who, in his book Vision in motion (1956), writes: “The enemy of photography is what is conventional,  the strict rules of the user’s manual. The salvation of photography lies in experimentation. The experimenter has no preconceived ideas about photography. He does not believe that photography is the exact repetition and transcription of ordinary sight. He does not think that photographic errors should be avoided; they are trivial errors only from a conventional historical point of view”. 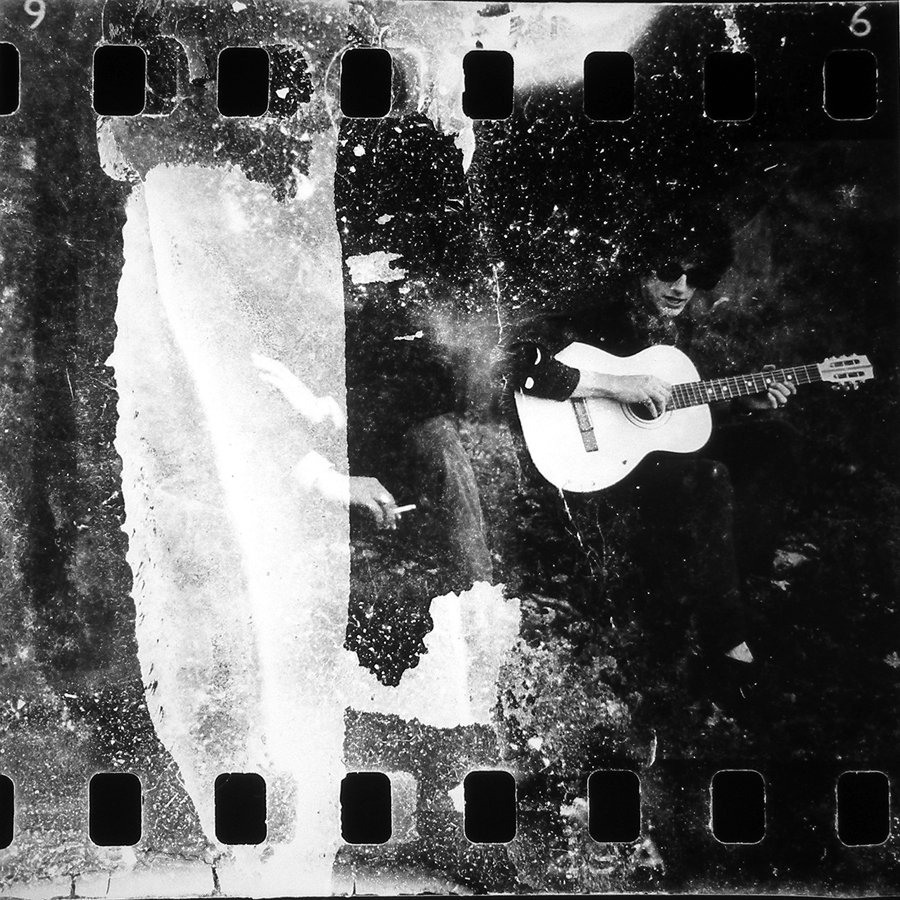 In the etymology of the word “error”, in addition to the primary meaning of “mistake”, we can also find another interpretation that declines it as “moving away from the truth”. And it is precisely on this side that sits Franco Marinai’s operation of recovering photographs once discarded because imperfect, confirming a sort of storytelling that uses the sequence and the combination of images as the only element of forcing and subjective bearing. Franco Marinai does not reinterpret the facts, does not mix images of the past with images of the present, he does not suppose fantastic scenarios. He focuses exclusively on the act of recovery and selection.

His archive of errors returns to life after more than 50 years, in a playful and at the same time profound way, through the narrative structure that the wise and intuitive combination of images. The past is not only not removed but is questioned for new questions. And questioning is one of the main values ​​that defines artistic practice.