Why do we still crave shades,
nuance only, not color!
Oh! the nuance only marries
the dream to the dream and the horn to the flute!
Paul Verlaine, Ars Poetica, 1874

One autumn afternoon a few years ago, at the kitchen table, my daughter and her young friends were browsing the pages of a book together, discussing animatedly. It is a joyful moment of fervor and vitality coming out from their bodies. They were inside that book, inside the vision of another person, totally immersed in another world.

They were reading through Just Another Gender Theory, the prototype of the project that Filippo Romanelli, a student of the three-year photography course at the FSM, gave me at the end of his cycle of studies.

A virtuous example of storytelling through images that I had shown to my daughter, then a high school student struggling with her first notions of photography, in the hope that she would come to consider photography as something more than a simple tool for communicating on social media. I remember that, seeing so much enthusiasm and dialogue in such young adolescents, I immediately realized that the project would have a future, a long life. I was already fully convinced, but that episode strengthened my opinion not only on the artistic value of this work but also on its narrative effectiveness. It was essentially thanks to the force of communication and the balance of the sequence that these adolescents, unaware of the problems of photographic language, were able to enter a complex story, to understand that photography can function as an investigating gaze, as an instrument that does not transmit truth but reveals the way to reach it (S. Sontag), as an enigma on which to question oneself in order to acquire awareness.

The project, developed by Filippo Romanelli over several years of research and study, is a vast and articulated one. A work that certainly has its roots in sociology but also in the rejection of reality as it is given, which seems aimed at questioning the noema of photography, that “was” of which Roland Barthes spoke, to explore, instead, through the staging and the poetics of “remixing” (C. Marra), emotions, visions and philosophical questions about identity. A practice that the surrealist avant-gardes of the early twentieth century had already used extensively, favoring the development of a different approach to photography, understood more as an interrogation than a mere representation. While moving within this practice, over time, Filippo Romanelli has however ended up developing a design process that is visually placed in a contemporary context and has multiple and successful digressions in narrative art.

The added value of the project – which became a book in 2017, thanks to a crowdfunding campaign promoted by the Crowdbooks editions – undoubtedly lies in the extraordinary ability of its author in addressing, without forcing, the complex issue of gender identity through the contamination and questioning of photographic genres.

In the presentation of the project, during the crowdfunding campaign, Filippo Romanelli described his intentions as follows: There are people who feel that the gender attributed to them at birth does not describe them completely or at all. There are people who do not identify with the heteronormality typical of our society, who reject rigid categorizations and gender stereotypes because they cannot adequately describe the multifaceted nature of human psychology and identity. There are people who claim the right to self-determine their bodies and desires. It is from these people that my project idea starts to develop. 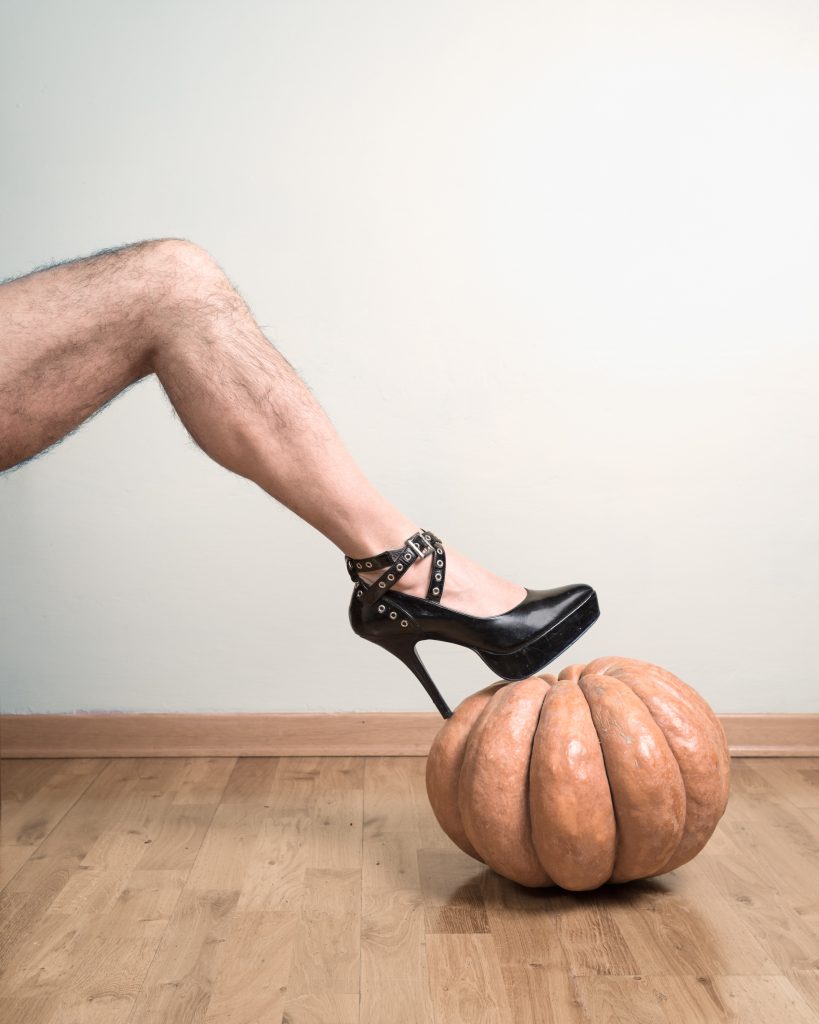 The author is deeply convinced that gender is a universal issue and cannot be limited to LGBT environments. All our lives – he declares during the interview – are ultimately gender stories because we are all conditioned by the way society educates us to gender from an early age. It’s sufficient to think of the pink and blue of the bows of kindergarten children, the images and the philosophy of cartoons to realize how this Manichean approach ends up affecting negatively the imaginary of children and, once they’re adults,  their approach to gender differences.

Since childhood we are used to identify gender as a dichotomous reality, in which there are only two possible and even opposing identities: the masculine and the feminine. A society based on such a strong opposition inevitably creates power struggles and inequalities, influencing and subtly conditioning our life. All of us, not just those who belong to LGBT realities, suffer strong social conditioning coming from religion, language, iconography. It is no coincidence that I chose to open and close the book with two religious images: Adam’s rib and my queer Jesus.

To counterbalance this strong conditioning, we need to rethink gender. In reality there are people who live a continuum of possible identities, moving between these two opposing poles. It is starting from this awareness, from an “other” way of experiencing gender identity that I have decided to structure this project and to treat gender as a fluid reality, as a continuum of possible identities at the extremities of which there are the concepts of “male” and “female”, in contrast with the biological correspondence and with what social conditioning has accustomed us to think. 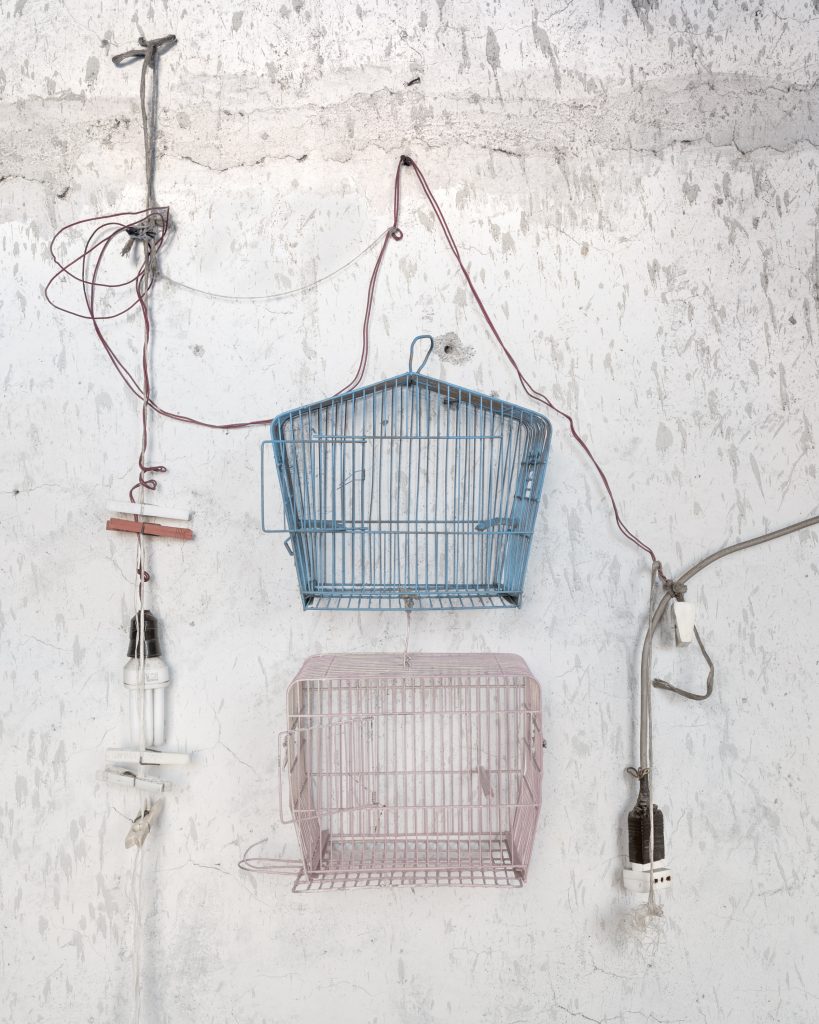 In carrying out the project, Filippo Romanelli explored various conceptual hypotheses and fed his intellectual, political and aesthetic elaborations through a tight theoretical study, to open up to different points of view and a greater awareness and fluidity. He used photography – the last part of a long journey – as well as writing, statistical research, archival research, augmented reality. The result is an extremely complex book but also immediate in its fruition, a sign that the theoretical framework on which it is structured has been strongly metabolized and internalized by its author.

A book of great balance and great communicative strength, cured by the photographer in every detail, even in the graphic part and in the choice of a particular type of cube as a symbol on the back cover. Necker’s cube, in fact, modified by Carter in 1996 in The Angel’s Dictionary, is a geometric figure that the brain sees as three-dimensional and alternately concave and convex, a figure that symbolizes the possibility of seeing gender as a fluid reality within a world which is set to see each person solely as one of two possible binary options. It invites you to question what you see, or are convinced to see, to grasp the true image of what is in front of us.

I am always very fascinated by the personal motivations behind a project but, even more so, by the subsequent putting on the page of the images created, by the narrative structure that gradually takes shape through the sequence and juxtaposition of the images. I believe it is a particularly delicate and creative moment that the photographer must go through in order to communicate his vision in a stringent way. This is not a simple operation: organizational and logical skills are not sufficient, one cannot limit oneself to put together images by formal proximity. Here too it is a question of dealing with a psychic process, of elaborating a path of acceptance of each image, in relation to the others. It is a complex synergy, which involves renunciations in view of a common goal and general interest. 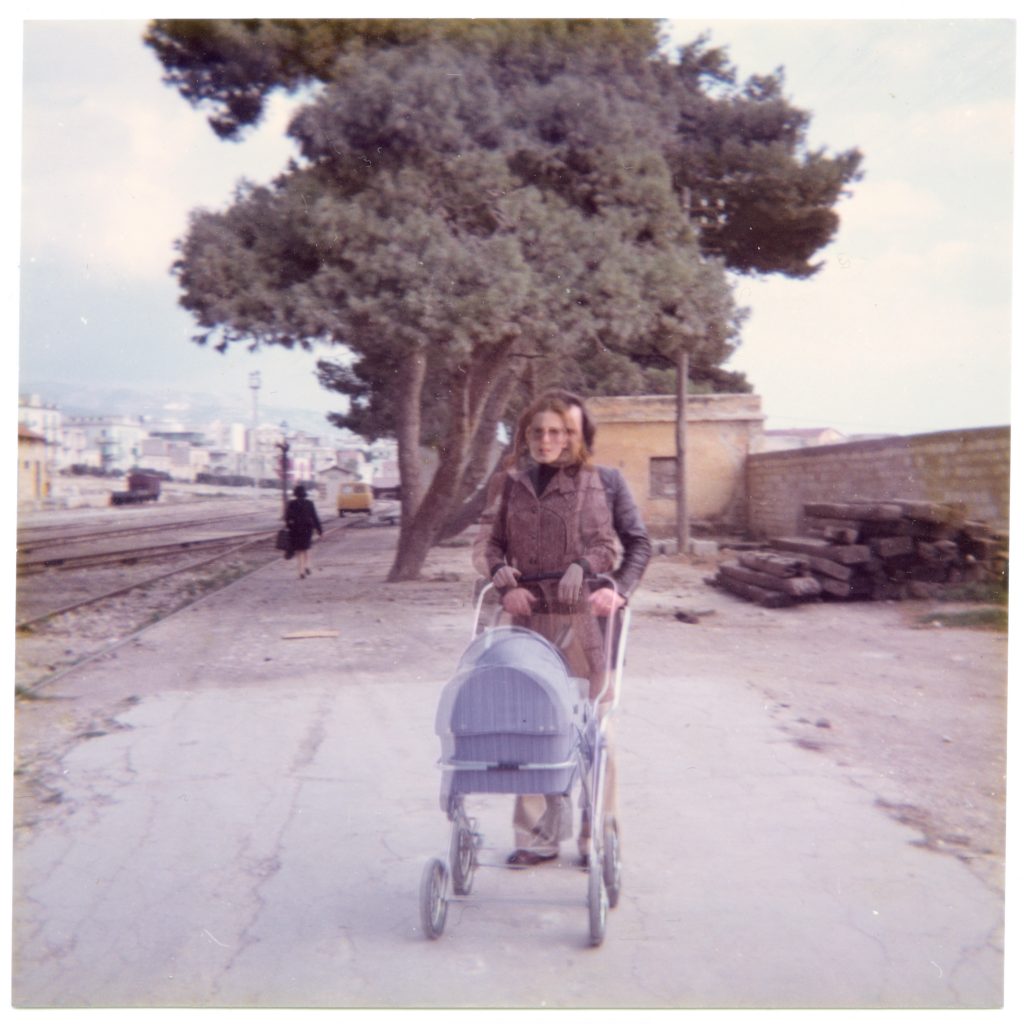 During the long conversation I noticed, once again, the extraordinary design skills acquired by this author, young but capable of depth and intensity, his ability as a photographer, art director and graphic designer at the same time, his awareness of the dynamics of narration: Once I reached a good theoretical awareness on the subject – Romanelli continues – I asked myself how to represent photographically the complex and articulated positions that revolve around gender. It was not enough for me to portray subjects belonging to LGTB movements, I wanted to link the individual dimension to the collective one.

I therefore chose to use different languages, to mix archive images with posed portraits, still life, stage photographs; to appeal to my memories and my personal experiences and to mix them with the stories of the people I met during the project and with whom I established a relationship of trust and complicity, welcoming their frailties but also their courage. I tried to find stories that covered the many different aspects of this reality, from intersex to transsexual reality, from drag queens to homogenitorial motherhood.

In the portraits, I chose the setting and the front position as a mirror of an honest and direct representation – Romanelli explains. I had Paul Strand’s lesson in mind and I tried to shoot my subjects inside their homes, in the places where they felt protected, in order to find that intensity and trust that we had established between us. I wanted to be sensitive to these people, I wanted their private to be central and for them to feel free to move as they wanted, without the constraints that society imposes. I recorded our conversations, the emotion that transpires from their voices, from their stories. Short parts of it have been written in the book but using augmented reality codes you can listen to the interviews in full, you can enter each story in an intense and deep way.

The working method was very precise and in the design I was certainly helped by my previous professional experience in advertising agencies, where it was essential to define objectives and strategies. As for the photographs set up, more closely connected to the personal and collective imagination, I started by defining what I wanted to say and how I wanted to say it, working on the deconstruction of stereotypes and prejudices, using sarcasm and irony in the visual representation. This way I created images such as that of San Sebastian pierced by rubber darts, the Cinderella with the pumpkin and the hairy leg. 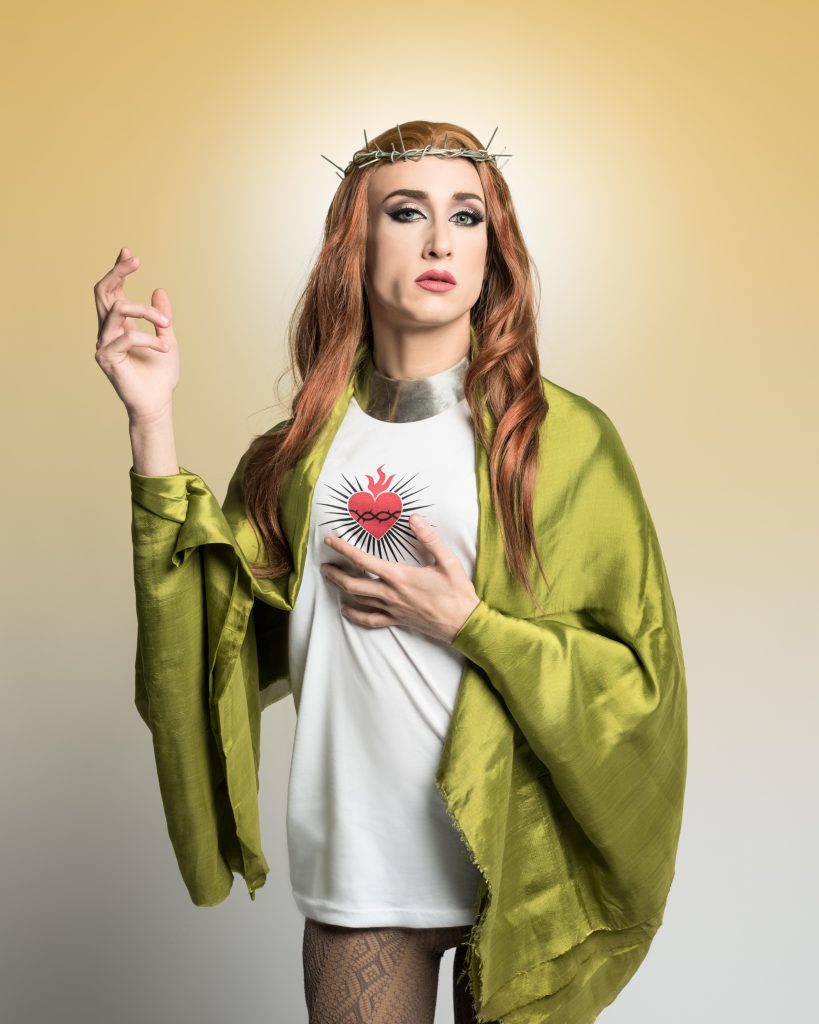 The use of quotes, the appropriation of images that are part of religious culture and the history of art merge in this beautiful book with the history of photography, with deconstruction and recomposition, in a very successful practice of mixing up and reaching completeness, embracing various genres. A great example of reality and imagery that come together. An excellent example of photography/thought that invites us to investigate the multiple nuances of reality and gender identity. 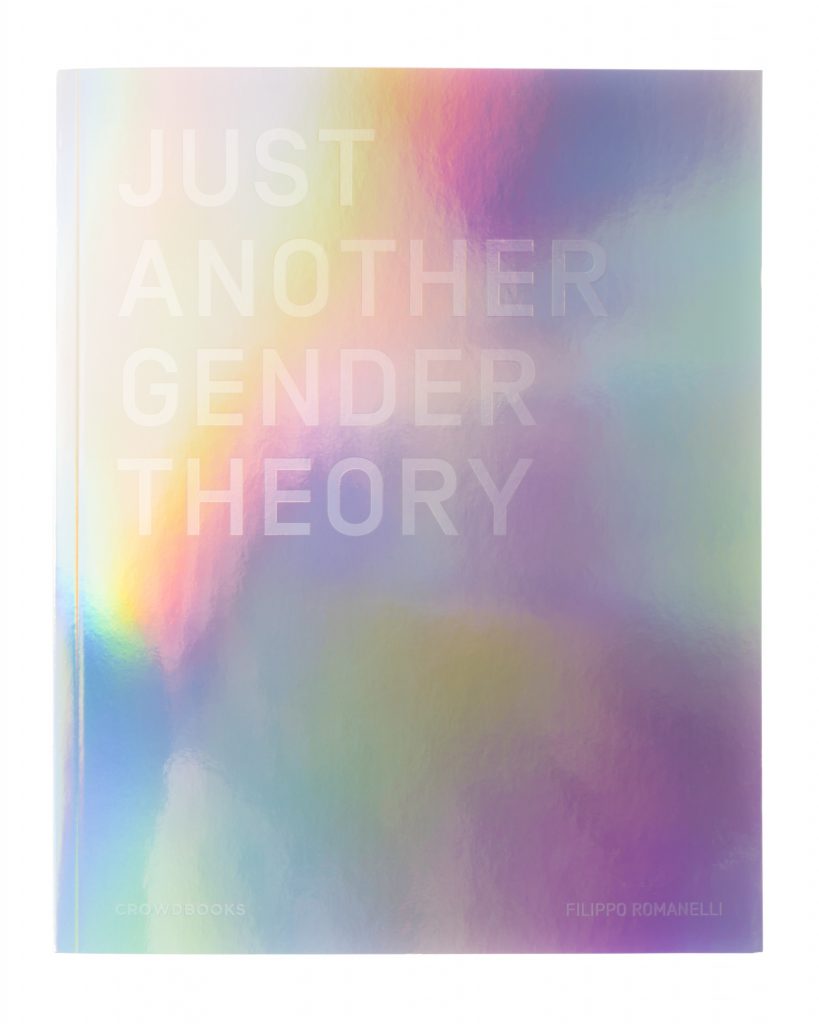