Carmelo Bongiorno’s latest book, Tagli (Cuts), evokes in an incisive way, right from the title, the semantic constellation of reference of the signs summoned by his gaze.

To cut means to break a continuity, to separate, to divide, (and also to go the fastest way, and to mix different substances). Cut is the sharp part of a blade, it is what cuts, it is the wound and the thing being cut.

Photography is also a cut, a solution of continuity, separation of a part from the flow of time and places to recreate the image of it. And also crossing, for the “shortcut” of thought through images.

We find clear echoes of these resonances in this book, where black and white images are organized in diptychs, separated – and together united – by a bright red line; the layout presents them to us in a tight montage that underlines their meaning, giving them rhythm with inserts of details cut out from the images themselves, thus expanding the work of our perception from the single photograph to the internal links, to the constitutive images of the diptychs and to the entire sequence of couples. 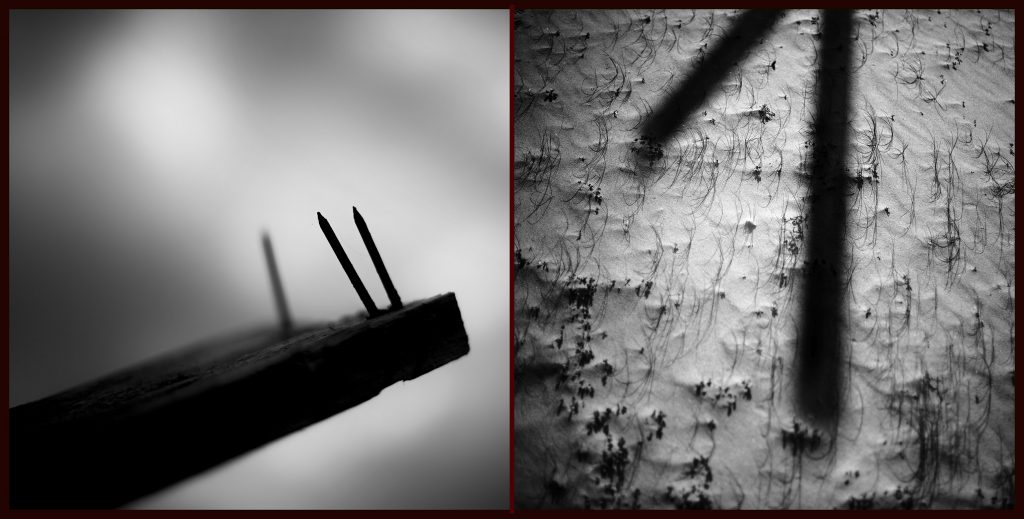 Relations that challenge us, that call us to welcome and elaborate their suggestions to receive – as always in photography – a completion of sense for the viewer.

In his previous works, the photographer from Catania had mainly shown us evocative and intimate emotional figures, whether it was black and white photographs, with soft focus images where the light blurs the outlines and fades them into a suspended atmosphere, or with images in which the mostly anti-naturalistic use of colour, combined with blurring, contributes to an alienating effect of places and objects.

If the soft focus is always associated, in a grammar of the image (both consolidated as commonplace and reductive) with the evanescence of memory, with the expression of a dreamlike or generically emotional dimension – it has to do also with the imperfect capture, through an image, of the intensity of an ephemeral perception, to retain it and empathically share its emotion. 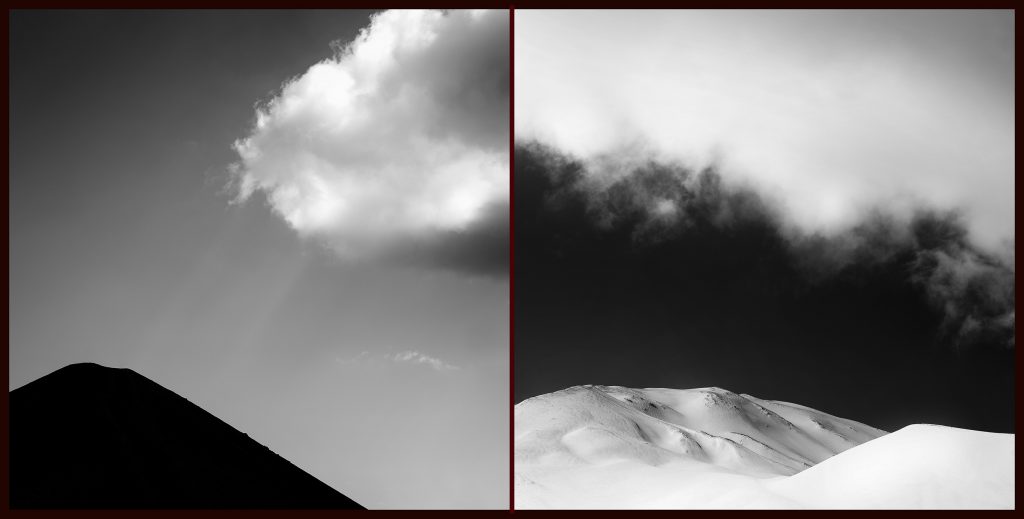 As Serge Tisseron writes, soft focus photography (so widespread, despite the fact that machines are increasingly capable of ensuring great sharpness) places photographic practice and its images in another relationship with space and time compared to sharp images. It does not respond to the need to testify the ça a été that Roland Barthes poses as a noema of photography, “but it has to do with another imaginary, that generated by the failure of the illusion of retaining an object through its image”.

The photographer sometimes “tries to evade this disappointment. He tries to fix not the object anymore, but the movement of his attempt, the desire for its impossible capture, if not with a cut. Deliberately soft focus photography is part of this imaginary. It does not pretend to fix a fragment of the world, but, on the contrary, testifies to the impossibility of succeeding. Its privileged object is not a portion of space, but duration itself, or rather the way in which it extends its shadow over our perception of things”. And speaking of sensations, emotions, movement, he also speaks of the body that accompanies the creation of images. 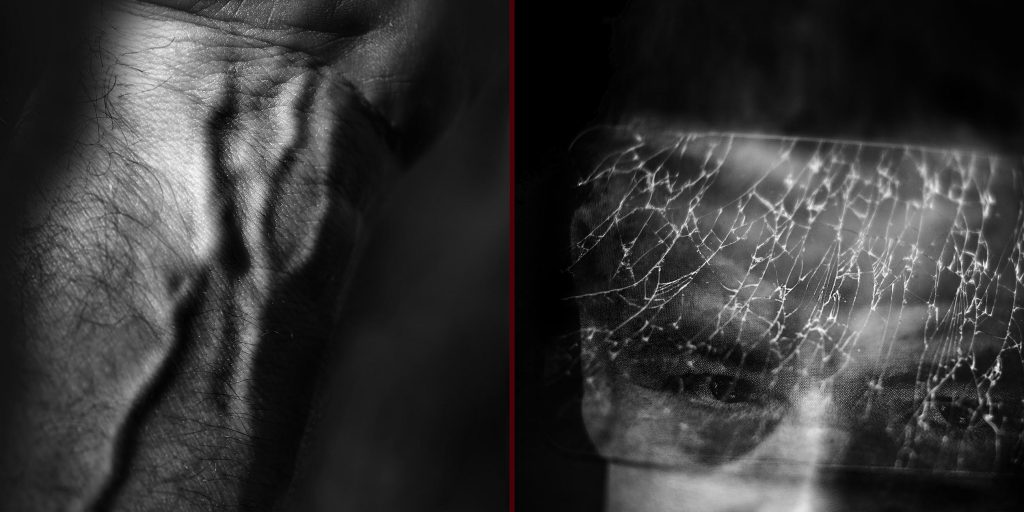 In his new work Carmelo Bongiorno shows that he wants to go further, as the emotion becomes painful testimony and the urgency to communicate goes beyond the personal sphere. The soft focus retreats: a cut requires sharpness of contours, the caesura (which is the theme, and also its photography) is addressed and finally shown for what it is, separateness, wound, pain.

The gaze is firmer, becomes frontal and returns images in focus, pairs of square format photographs in which different signs and references are mixed (“cut” one might say).

And again images in which the cut is literal: bodies marked by scars and sutures, but also cuts that separate the light from the shadow, those of a frame, of a window, or evoked by sharp objects, threads, natural elements, landscapes. And cracks, incisions, scratches, cracks, corrugations of materials, signs produced by time. And again, contrasts of black and white, of positive and negative, photographs, cut-outs, in a montage of strong expressive intensity, with a continuous reference from the physical to the symbolic dimension. 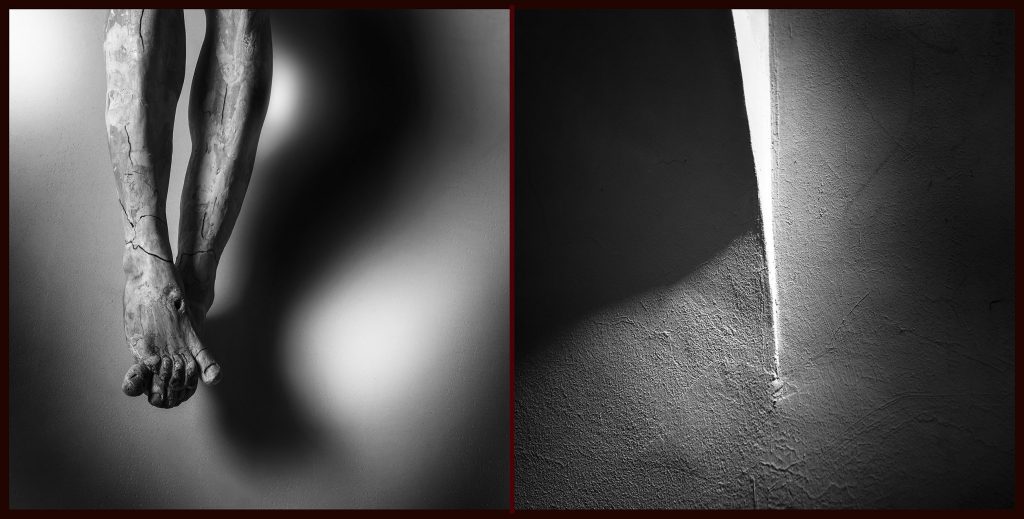 This is what Carmelo Bongiorno talks about with his images: the lacerations, the contrasts, the traumas and the pain that his gaze evokes are substance of the world and of man. And also, we could add, of his photography, because Tagli is at the same time a reflection on the world and on photography.

His few lines – almost a poetic prose – that accompanies the images in the book also speak of these themes.

And it is with photography, with his gesture, with this body of images that he faces those topics and indicates them to us, preparing for their elaboration and perhaps possible reconnections.

The exhibition: the project, supported by the Assessorato alle Culture (Department of Cultures) of Palermo, will be on display in Palermo from the 10th to the 31st of July.