Small historical notes
Pyrogallol is one of the oldest components for the chemical development of photographic images. Its improved features were appreciated as early as 1851 when Frederick Scott Archer used it for the first time in the development of his wet collodion plates. The first formulations brought excellent results but they were very difficult to control and often gave discontinuous results. Oxidation effects, often uneven, caused complications to the printed image. With the introduction, since the beginning of the 1900s, of detectors which were more reliable and less toxic (metol and hydroquinone, for example), the pyrogallol formulas were progressively abandoned. Only a small number of artists, including Paul Strand, Edward Weston with their children Cole and Brett, despite the difficulties in using it, continued to proclaim the advantages in terms of visual quality of the image.

The negatives of Morley Bear
It was the American photographer Morley Bear who showed me some negatives developed this way for the first time in his darkroom in Carmel. In 1994 Bear was 78 years old and the experience of a lifetime in photography. Bear used amidol to develop photo papers and “Pyro” for his flat films. He said that with the pyrogallol can’t help you taking good photographs: those are made with the eyes and the heart, the pyrogallol gives you superior quality results, that extra special touch. Bear’s photographs showed depth and great tonal completeness. In the darkness of the dark room, on the light table, Bear’s large 20×25 “negatives revealed their unique appearance: I was struck by the yellow-green color and the fact that the image possessed a strange characteristic of luster and reflection, a kind of relief effect. I didn’t know yet that in reality, in those negatives, the chemically formed images were two, and that, over the silver one, a second layer determined the color.

The Book of Pyro
My practical approach coincided with reading the book The Book of Pyro, by Gordon Hutching, the best point of reference to approach the most up-to-date techniques of pyrogallol development. Unfortunately it is currently quite difficult to find. The book also describes the use of an improved development formula, designed to replace old formulas no longer suitable for developing modern sensitive emulsions: the PMK formula, consisting of pyrogallol, methol, Kodalk (sodium metaborate). The formula has an excellent effect of “staining” (coloration), a phenomenon that gives the classic yellow-green tones to the developed image and offers important advantages in the printing phase.

Important precautions
We are in the presence of the most poisonous chemical that can be used in a darkroom. The powders must be handled wearing protective gloves, clothes worn only during this operation and a good protective mask to avowing the inhalation of the pure component. The preparation environment must be well ventilated. Once the solutions to be preserved are obtained, the subsequent use of the small quantities of detector must be approached with caution, wearing gloves during the entire treatment procedure. Work surfaces should be thoroughly washed after each development session.

Qualitative advantages of the PMK formula
In the negative:

The most valuable feature in the use of PMK is the coloring effect that makes the appearance of the negative so special. In fact, in addition to the silver image that is formed during development, due to an oxidation phenomenon, a second layer forms on the image itself: a yellow-green mask that is proportionally deposited more on the greater blackening ( the highlights on the negative). The developed image is more colorful as densities increase. An important advantage, especially when combined with the use of a variable contrast paper. The magenta and orange filters at different densities are used to get different components of yellow or blue filtering to the paper, red is used to balance exposure passing from one shade to another and it is with yellow filtering that we lower the print contrast.
The negative developed with pyrogallol has a more pronounced yellowish color at maximum densities; as a result, the paper responds on the high lights with a lesser contrast, making them more readable. The rest of the tonal scale retains separation and contrast as little influenced by the coloring of the mask. This phenomenon of tonal compression facilitates printing operations, but many complain it results in flatter and less brilliant images. I think that the choice of a detector of this kind is tied to the type of character you want to give to the photograph. From the development with pyrogallol we will expect a very sharp image in terms of micro-details, but soft and with a very extensive tonal scale in the general visual aspect. Moreover, unlike conventional developments, where the increase in acuteness corresponds to a general increase in noise (grain), in negatives treated in PMK the grain is very fine due to the mask on the silver agglomerates

The typical aspect of the negative
A negative presents, after development in PMK, a very extensive tonal scale with transparent and fully separated densities.
To obtain the best results, the negatives must possess good exposure characteristics. To produce the optimal stain effect, it is necessary that the negative contains all the possible detail in the shadows without exceeding; slight under-exposure is preferable rather than overexposure.
The choice of film is very important. I have noticed that films with a more modern design and with tabular technology do not fully react to the effects of coloring. Excellent results are obtained with classic films including Ilford FP4 and HP5.
In the negatives the singular effect of three-dimensionality of the image is evident, especially if observed by tilting the film under a light source. In fact, pyrogallol developments belong to a category of chemical tannin detectors, the effect of which determines a pronounced hardening action on gelatin. On the negatives the relevant visual effect is much more evident than on a negative developed in a generic detector. 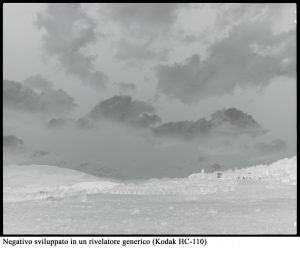 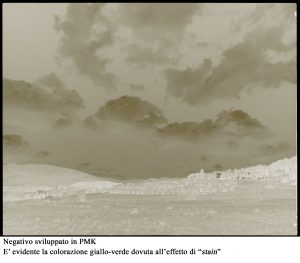 Treatment phases
PMK development is conserved in the form of two concentrated solutions to be diluted in water at the time of use. The first stock solution contains the detectors, metol and pyrogallol, and a preservative. The second consists of a saturated solution of sodium metaborate (kodalk). The work solution is prepared by diluting a part of the first solution with two of the second and one hundred parts of water.
The treatment of the negatives follows the classic method of development, stop, fixing, but, to ensure that the formation of the yellow coloring layer can be formed, certain precautions must be respected:

It is understandable that excessively acidic solutions, or those containing sodium sulphite or a hardener, cause the mask formed during development to dissolve. To intensify it, the curious re-use of the development bath after fixing is adopted, and even prolonged washing tends to reinforce the appearance of the mask.

Development of pyrogallol and digital technology.
With the use of inkjet printing we can ask whether it still makes sense to use a chemical process of this type in the development of negatives. The next observations will therefore be addressed to those photographers who continue to prefer the use of film as a filming matrix and who then switch to digital management by scanning their negatives. I believe that the full benefits of pyrogallol development show in enlargement printing, especially for the response that the variable contrast papers have towards the effect of stain. But even in the case of scanning, the PMK offers important benefits. The negatives, due to their never excessive density, the excellent separation on the lights and the pronounced edge effect, favor a scan which is richer in detail, clear and complete on the whole tonal scale from the first phase of elaboration.